Can we talk about animal emotions now?

Lately, more discussions have been had around animals having complex emotions, both positive and negative... 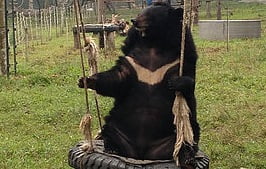 Lately, more and more discussions have been had around animals having complex, intelligent emotions and the implications of this. In fact, various researchers in animal welfare have been gently pushing this concept for many years now. From attesting that animals grieve to ravens potentially having theory of mind, animal sentience and the capacity for many species to be able to experience complex emotional intelligence is becoming increasingly accepted. With our current knowledge of how emotions are derived, this shouldn’t come as a surprise. The ability to have a spectrum of emotions doesn’t necessarily require a complex cognitive process, in fact all mammals share the same structures within the limbic system that are essential in the manifestation of emotions, and while birds have some structural differences, they are functionally the same.

Emotions are effectively our stabilisers, directing us along a path that in the past ensured our survival. They have evolved to be more than that now; helping us and other animals have rich, deep and complex lives. From the perspective of animal welfare, we need to be recognising these emotional dimensions experienced by other nonhuman species and doing more to ensure the positive expression of emotions for those in our care. Like us, an animal’s emotional capacity is greater than trying to avoid negative experiences. We should be trying to not only minimise these negative experiences, but provide for those rewarding behaviours that animals find emotionally positive too. It is simply not enough to just ensure animals have good physical health, are being kept in clean and safe environments and can carry out basic behaviours.

However, if emotions are so important to animal welfare, why haven’t we talked about them before? Our emotional capacity is linked to our sentience or consciousness and Charles Darwin actually wrote about animal consciousness in 1872 but for most of the 20th century we showed little inclination to scientifically explore the inner lives of animals. In fact, many researchers saw emotions as superfluous or irrelevant for humans too. More recently, while emotions have more readily been discussed, animal welfare scientists have tended to focus on the negative emotions as they can often provide the more measurable behaviours or indices. However by mitigating negative emotions that may result in a more neutral state of welfare, it does not necessarily create a positive state – a state that the animal itself will be actively seeking.

But as we start considering the promotion of positive emotions more when talking about welfare, are we falling into a trap of applying our own perceptions of emotions on animals? Feelings, particularly positive ones are fairly inaccessible from a measurable and scientific perspective, and the anthropomorphism accusations start getting floated, putting even the most savvy of scientists on edge. Well, while a degree of anthropomorphism is required to talk about animal emotions, this is simply because we as humans, can only really think within in our own conceptual and subjective norms. The German biologist, Gordon Burghardt introduced the term “critical anthropomorphism” which essentially is using your own human intuition and understanding as a starting point for understanding animal cognition. So given the evidence, what we perceive as happiness in other species could in fact be exactly just that.

What then does this really mean for the animals we care for, and can we use it in our day-to-day management of them?

It can help us relate more easily to animals.

Objectively we know everyone around us has emotions, but to the self they are very subjective and in some cases feel relentless! While they are designed to ensure our survival, how they feel to the individual is very personal. We may have similar reactions to certain situations as a result of our basic emotions. However as individuals, how we feel on a day-to-day basis will differ from person to person depending on other experiences, both past and present. Understanding that “one size doesn’t fit all’ when it comes to experiencing both positive and negative emotions, can also help us understand and empathize with other non-human animal emotions and feelings. Empathy breeds compassion. To paraphrase, their lives matter to them as much as ours do to us. Appreciating that individual animals have preferences and complex emotional reactions can help us provide the most appropriate care that meets these animal’s individual needs.

We can identify better welfare measurements

Many animal welfare assessments are based on identifying negative welfare responses, such as elevated cortisol levels, aversion activities or abnormal behaviours. However through this approach we could be missing critical welfare indicators as well as potentially compromising an animal’s welfare. While animal inspections or measures remain focused on the objective and physical parameters, the positive and rewarding behaviours that an animal may seek could get missed. Similar to humans, emotions in animals are used as motivators to seek out positive experiences. They are self-perpetuating and go hand in hand with behavioural needs that have evolved. Knowing this, if we have a comprehensive understanding of a species needs, we should be able to take more measures from positive, emotionally driven welfare indicators. While a captive animal may be provided with more than enough food so it is nutritionally sated, if you consequently remove the need to express the natural foraging or hunting behaviours that have evolved, you may compromise the animal’s psychological well-being. From an evolutionary perspective these behaviours may be as complex, stimulating and possibly as rewarding as the food itself. In that case, measures and management of animal welfare should include the ability to mimic those rewarding behaviours and stimulate positive emotions.

We can start challenging current practices and legislation

In 2012 a group of scientists offered up what is called The Cambridge Declaration on Consciousness, concluding “…evidence indicates that humans are not unique in possessing the neurological substrates that generate consciousness”. Last year New Zealand formally recognized animals as sentient in its Animal Welfare Amendment Bill. However despite these advances, when it comes to animal welfare legislation globally, good protection standards have a long way to go. If standards exist they are often based on simple or unquantifiable measures, leading to uncertain interpretations and non-compliance. Perceptions of animal welfare are globally variable and culturally sensitive. Nonetheless in spite of these perceptual variations, an animal’s welfare experience is highly individual and independent of these perceptions. Therefore clarity on what animal welfare actually means to the animal and comprising both positive physical and psychological requirements into definitions and consequent measures are essential to bypass vague and ambiguous guidelines.