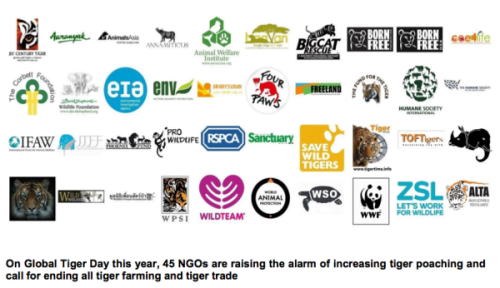 Today on International Tiger Day we the undersigned 45 non-governmental organisations are urging countries with tiger farms to adopt urgent action to end tiger breeding for commercial purposes and phase out tiger farms.

The global wild tiger population is estimated to be less than 4,000. These last remaining wild tigers are each threatened by trade for nearly all of their body parts – from skins and bones to teeth and claws – traded by criminals for huge profit. These products are consumed largely as exotic luxury products for demonstrating social status, such as tiger skin rugs for luxury home décor or expensive tiger bone wine. Tiger bone is also consumed as traditional medicine. The main market for tiger products are consumers in China and Vietnam, followed by smaller consumer markets in Myanmar and Laos.

There are currently two primary sources for trade in tiger parts and products: wild tigers in ten range countries that are home to the last remaining wild tigers, and captive tigers largely found in four tiger farming countries – China, Laos, Thailand and Vietnam.

Tiger farms have expanded rapidly over the last few decades. In the four tiger farming countries alone there are approximately 7,000 – 8,000 captive tigers in large tiger farms, zoos and smaller facilities that keep or breed tigers.

The wild tiger population has declined by over 95 percent over the last 100 years. 2016 has also marked a significant upsurge in tiger poaching and trade where in India more tigers were killed in the first five months of 2016 that in the whole of 2015.

The tiger range countries where tiger populations are beginning to show signs of recovery have high levels of political commitment, strong laws and enforcement – and no tiger farms. Where tiger farms are present they only serve as an obstacle to recovery. In recent years China and Thailand have both delivered important new tiger conservation efforts on the ground. Despite this investment, the effects of tiger farms limit the potential gains from such work, as well as damaging those countries’ reputation in the area of species conservation.

We commend the recent bold enforcement efforts of Thailand’s Department of National Parks, Wildlife and Plant Conservation (DNP), which in June 2016 seized 137 live tigers thousands of tiger skin amulets, 70 preserved cubs and other tiger parts from the ‘Tiger Temple’ in Kanchanaburi Province. The DNP has announced that it will investigate other captive tiger facilities implicated in tiger trade. This represents a significant opportunity for Thailand to end all tiger farming within its borders and to play a leadership role in the phase-out of tiger farms in the region.

Other countries should also take action to ensure that they are not implicated in the trade in captive tiger parts and products. For example, there appears to be a growing trade in tigers and their parts and products from South Africa. The United States also has a large number of captive tigers which may too become vulnerable to exploitation for illegal trade.

The world needs to wake up to the alarm bells ringing across the tiger’s range. It is clear that tiger farming and trade in captive tiger parts have done nothing to end the pressure on and trade in wild tigers. In September this year, world governments will come together in South Africa to participate in the 17th Conference of the Parties to the Convention on International Trade in Endangered Species of Wild Fauna and Flora (CITES). The CITES conference offers a significant opportunity for governments to adopt and call for urgent implementation of concrete measures to phase out tiger farms.

If wild tiger populations are to be recovered and secured, the international community must provide support to end tiger farming and all trade in tiger parts and products from wild and captive tigers. We the undersigned, including those with technical expertise in managing captive tigers, stand ready to provide assistance to achieve the goals of Zero Demand for tiger parts and products and Zero Poaching of tigers.