Unlocking the Wild Side of Parrots under Human Care 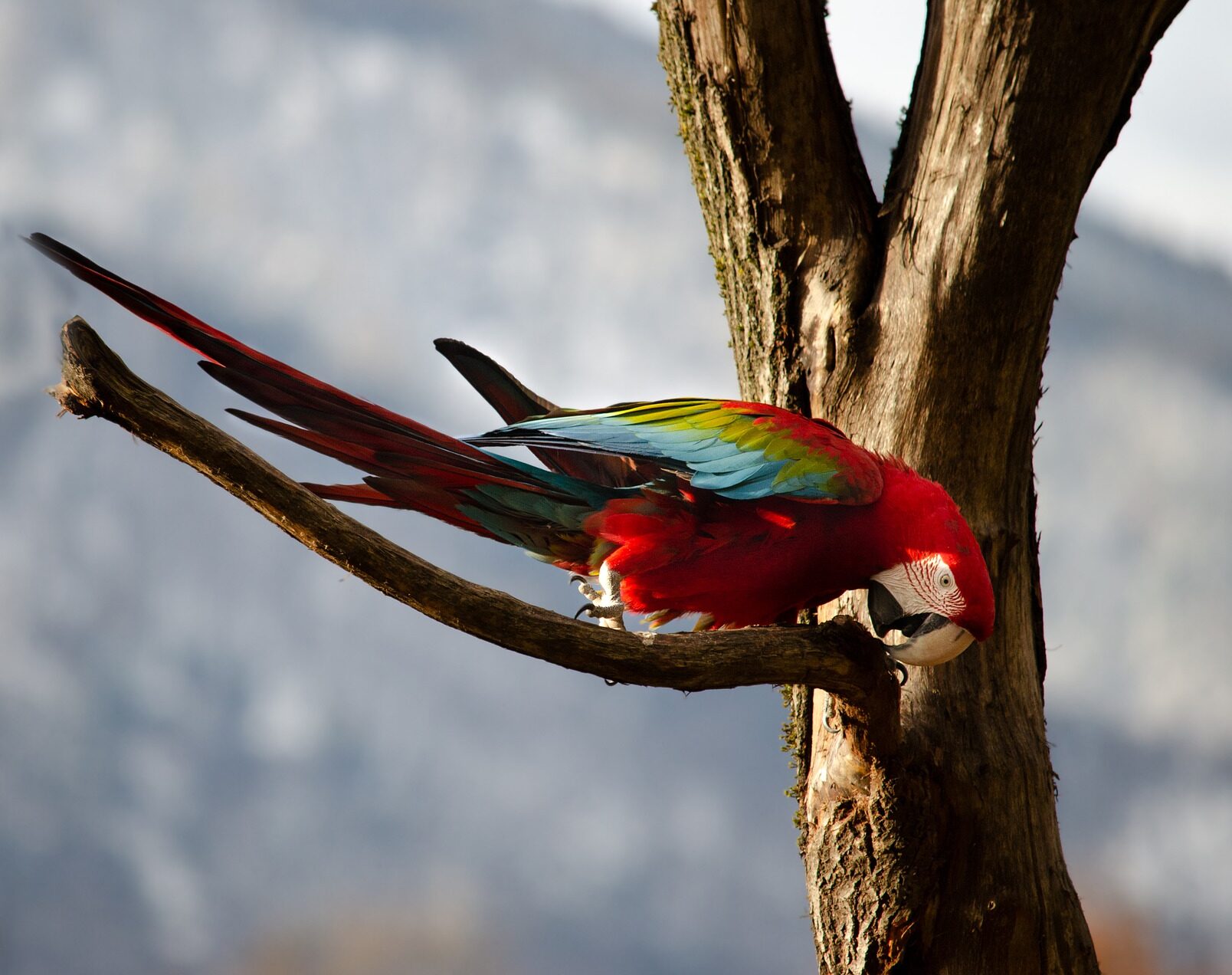 Ricardo Lemos de Figueiredo is a zoo researcher in animal behaviour, currently finishing his PhD at the University of Birmingham, UK. He is also a founder of the zoo science page: The Zoo Scientist.

Parrots, of the order Psittaciformes, are some of the most popular animals in the world. Their diversity, colours and charisma often attract human attention, and as a result, they are often kept as pets or in other captive settings such as zoological facilities. In fact, estimates suggest there are as many parrots in captivity as in their natural habitats, which unfortunately may indicate that many species are not doing so well in the wild. Over a quarter of all parrot species are threatened with extinction, and many of the species that are currently not threatened also have decreasing population trends. Habitat loss is, as usual, one of the main threats to most parrot species, but their popularity also has a lot to do with it, as they are some of the most common animals found in the illegal pet trade – the other major threat to this taxonomic group.

Captive breeding to the rescue?

With so many parrots under human care, well managed and genetically distinct populations in zoological facilities can play a major role in the conservation of their wild counterparts. However, if they are to be kept as “insurance” populations and be available for release programmes, when and if necessary, they must remain as behaviourally and morphologically identical to their free-living counterparts as possible. Captivity can have an effect on animals, with natural behaviours being lost or modified, and with sometimes profound changes to their physiology, organs, muscles and skeleton. A way to mitigate this effect is to enable and encourage captive animals to display the behaviour they evolved in order to thrive in their natural environment.

What about welfare in captivity?

Captive parrots often display abnormal behaviours such as stereotypies and feather-picking, and it is challenging to maintain proper welfare in these animals. Parrots have advanced cognitive abilities, sometimes matching those of primates, an evolutionary advantage that allows them to adapt and thrive in the diverse and complex environments they live in the wild. In captivity, they often experience environments that lack complexity and stimulation, resulting in not only the loss of natural behaviours and abilities, as mentioned above, but also in compromised welfare.

For the last four years, I have been researching how to modify traditional enclosures of captive parrots with the aim of enabling their natural behavioural ecology, as part of my PhD at the University of Birmingham. It is a rather challenging task, as parrots in the wild usually travel long distances between areas of high diversity and complexity, which is difficult to replicate in an area with limited space. However, I do enjoy a challenge, so I started by looking at the animals’ behaviour in their original enclosures. With a wide range of species to choose from, we decided to focus on two common species in captivity, the scarlet macaw (Ara macao) and the African grey parrot (Psittacus erithacus), both housed at our two zoo partners: Drayton Manor Park and Zoo (United Kingdom) and Jurong Bird Park (part of Mandai Wildlife Group – Singapore).

Several natural behaviours were found to be in need of a boost, such as general activity levels, flying, and complex food and object manipulation. Perching opportunities and enclosure use could also be enhanced. A visit to Costa Rica, made possible by our third partner Rescate Wildlife Rescue Centre, allowed me to collect some data on free-living scarlet macaws. This data further confirmed the scarlet macaws’ high activity in their natural habitat, their incredible proficiency at complex climbing and food manipulation, and their clear preference for heights.

With that in mind, we worked with the animal care staff at both zoos to modify the enclosures of the target species, with the aim of enabling those specific behaviours.

How did we modify the enclosures?

The strategy we applied for the enclosure modifications was to increase the complexity within the available space, by adding more structural supports and organising them so there were specific areas for different functions and behavioural expression. 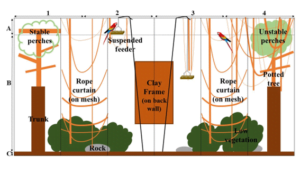 Each of the four corners of the enclosure was turned into an area of high structural complexity, with networks of perches with varied thickness, orientation and stability, in order to encourage more challenging climbing behaviour and more even use of the enclosure. The top areas were particularly enriched, to give the parrots the opportunity to be as high as possible within the enclosure, as they prefer the safety of heights in the wild. Open spaces with clear flight routes were left in the middle of the enclosure, to encourage flying. Suspended feeders with surrounding vertical ropes (where enrichment items could be hung from) were placed in these areas instead. As parrots often rely on the wire mesh – a very basic and homogeneous type of support – for locomotion, we placed rope and/or branches in certain areas of the mesh, to interrupt potential routes and encourage them to opt for more challenging forms of locomotion. In the scarlet macaw enclosures, specifically, a small-scale “clay lick” replica was placed in the middle back of the enclosure, to encourage geophagy (i.e. soil ingestion), a natural behaviour in this species. 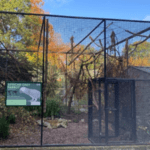 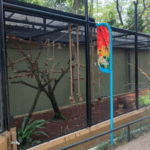 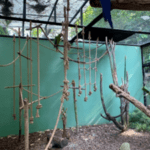 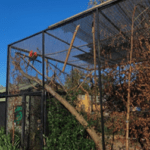 Figure 2. Photographs of the four modified enclosures, for African grey parrots (A, D) and scarlet macaws (B, C). Higher complexity of structural supports added to the sides and corners of the enclosure, while leaving open areas in the middle for flying. Supports were installed across the top side of the enclosure, ensuring opportunities to perch as high within it as possible.

Wooden boxes with multiple holes on top were used to place the food metal trays within, so food was not as easily accessible, making them search for it. Being suspended on a pully system, the vertical position could be changed regularly, also promoting more challenging types of locomotion. Puzzle feeders and varied enrichment items were also placed in some of the enclosures to try and encourage more complex manipulation and advanced cognitive stimuli. 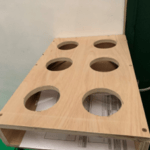 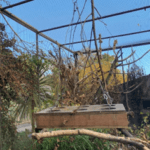 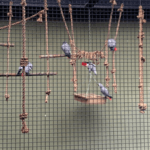 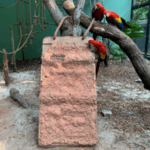 Figure 3. One of the wooden boxes used to place the food trays within (A) and another box already in place on a pully system (B). Grey parrots using the feeder box and surrounding supports (C) and juvenile scarlet macaws using the “clay lick” replica (D).

Did the behaviour improve?

The modifications were followed by many more hours of behavioural observations, and several changes were indeed detected. More of the enclosure was used by most individuals, and a clear preference for the top areas was also seen, supporting our predictions. Support use also improved – instead of mostly using stable, horizontal and thick perches, as observed in the initial conditions, they used a much wider variety of supports. They also relied less on the wire mesh for climbing, and more on natural and challenging structures.

Changes in the general time budgets were detected in some of the individuals, with more feeding and locomotion and less perching (i.e. inactivity) observed. Flight rates increased in both grey parrot groups but not in the scarlet macaws. Manipulation did not improve, however, with a lot of resistance to the puzzle feeders and some of the enrichment. The clay lick was used by most of the juvenile macaws, but the older individuals paid little attention to it. In such cases, a more active approach, such as animal training for example, is likely needed on top of the modifications and enrichment, to further encourage their use.

Summing it all up…

It is paramount we keep working on improving the lives of parrots in our care, not only to fulfil our ethical obligation of providing them with the best possible welfare but also to ensure they live up to their conservation potential when and if necessary. Given that they are some of the most common animals found in the illegal pet trade, it is important to note that attempting to meet the specific and complex welfare needs of parrots is incredibly difficult due to their diverse behaviours, spatial requirements and social complexities, amongst many other aspects of their care. In zoological settings, the provision of opportunities to express natural behaviours through increasing the complexity of captive environments and ensuring physical and mental stimulation are all key steps to this mission.

This research project was developed under the supervision of Dr Jackie Chappell and Professor Susannah Thorpe at the University of Birmingham, UK, and funded by NERC CENTA Doctoral Training Programme. This research also comes under a wider project – the Enclosure Design Tool (EDT), a web application that helps ex situ facilities comparing the behavioural repertoire of the animals in their care with their wild counterparts, suggesting enclosure modifications to improve behaviour and welfare.