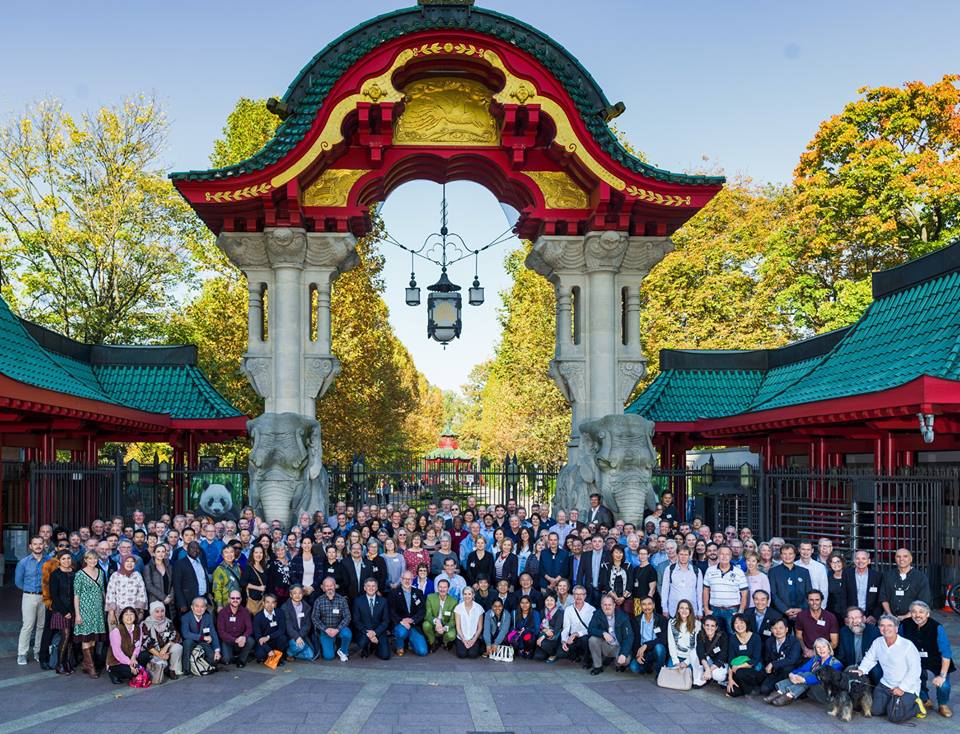 We also provided a short presentation on our work at the conference, the outline of which you can read here:

We have been attending WAZA for more than four years now, but for those of you who are not familiar with our work, we are a UK registered charity that fosters partnerships to improve animal welfare in zoos around the world by working closely with the international zoo and welfare communities. Why are we doing this? Well, aside from the obvious need to improve welfare standards within captive facilities, to quote John Scanlon, “society doesn’t distinguish between bad and good and bad zoos pull good zoos down”. We as an organisation, champion zoos that embrace welfare advances, and support those willing to make improvements.

I want to address a few points regarding our work that we commonly get asked about. Firstly, we are not a lobbying or campaigning organisation, so unlike many other independent NGOs who can be driven my campaign or supporter-led demands, we are product-led only, ensuring we work collaboratively with key stakeholders and partners that have the power to make the change. As such we have an ongoing MoU with WAZA and a number of regional zoo associations. Secondly, we do not prop up bad zoos. We continually assess the feasibility of success in regards to the facilities we work with and are collaborating on models to identify zoo support or closure. We choose to work with facilities that can act as ambassador zoos and have a wider impact within their country.

But to fix poor welfare at a zoo it isn’t as simple as just giving the right advice to that zoo. If it was, we’d be just be able to share the expertise and zoo resource from within this room and the solution would potentially have been long solved. Improving animal welfare in a captive facility means identifying the core problem to begin with. What are the barriers to improvement, are they real or perceived? Does it matter? And who are the stakeholders? It is the latter part of this that we really focus on; from legislators, visitors, local animal welfare groups to of course the zoo associations, animal welfare improvements (and long-term improvements, not just quick fixes) in just one zoo is often a highly involved process, requiring the participation of multiple stakeholders. Our ‘One Community‘ approach emphasises the importance of community development to safeguard human, animal, and environmental health and welfare within that zoo and the wider community. To do this we reliant on the inherent expertise that already exists within the zoo community but also from within the international animal welfare sector, who also use science-based welfare indicators to further welfare solutions. As such we have been in partnership with more than 20 international NGOs and zoo collections in the past 12 months to address global animal welfare concerns.

In the last year, a primary thrust of our work has been assisting national and regional zoo associations identify effective welfare-based certification and accreditation processes. We’ve been working with SEAZA, JAZA, VZA and SZB in this process and will continue to do so to align with WAZA’s strategy for 2023. As such we have facilitated 11 international training workshops in animal welfare, management and assessment. And we’ve been basing this training on our global welfare toolkits, namely our international standard and assessment process that feeds into a welfare-based accreditation system. Our comprehensive standard is derived from more than 100 different literature reviews and the most up to date information on animal care and welfare. It covers all aspects of animal management and underpins our welfare assessment process. We update it regularly, but more importantly we have also consolidated the standard into a digestible 4 page document. Nobody wants to read or translate a 20 page document, and if no one reads it, no one understands it – and we strongly believe that a comprehensive standard underpins effective welfare monitoring.

We’ve also updated our assessment processes based on stakeholder input, including from the Zoo and Aquarium Association (ZAA)’s executive team. Our Collection Assessment identifies the “animal welfare landscape” of a facility. There are 109 questions in total, split into five sections (as laid out by the Mellor Five Domain Model of animal assessment) and one miscellaneous section. And we now have an Enclosure Assessment which allows for more regular monitoring and aims to identify development and capacity in animal welfare knowledge by staff. This short assessment incorporates five sections, and is based around the five domain model of animal welfare compromise. The five sections have a total of 17 observations to be marked. Finally this feeds into our Welfare Accreditation Process – we have developed a welfare accreditation process that combines the principles of animal care and assessment into a comprehensive process that allows for effective monitoring, evaluation and ongoing assessment.

Alongside this work, we’ve also worked with approximately 50 zoos and aquariums indirectly and directly, this direct work is happening in individual facilities in Vietnam, Japan and Indonesia and Brazil. I want to give you one example. Within Vietnam we’ve fostered a partnership between a UK zoo and Hanoi Zoo. Hanoi Zoo is a city zoo with more than a million visitors a year, it is a government facility and a member of the Vietnam Zoos Association (VZA), which itself was formed in 2015 and its director is the vice-chair of the VZA which has 18 members, half of the number of zoos in Vietnam. Important to remember, in this zoo, staff are able to buy their jobs for life. So utilising a sister zoo model, or as Jenny likes to put it, Tinder for zoos – we fostered a long-term partnership between Hanoi Zoo and a UK zoo. This covers all aspects of their work, from master planning and record keeping to nutrition, and through ours and Animals Asia’s assistance (who have feet on the ground and a good working relationship with the zoo and national government), we provide staff volunteers to come and work at the zoo as well have assigned a point of contact that is dedicated to answering queries from the zoo.

So far, improvements include the closure of their animal circus, a comprehensive enrichment plan for the majority of their species and population management to control over-breeding. We also invited their most enthusiastic keeper to speak at an animal welfare training workshop we carried out at another park – the first time he had ever publicly spoken, let alone about animal welfare – as developing capacity and confidence from within the zoo community is so critical. But as I mentioned, improving animal welfare is multifaceted so we are also working alongside VZA, and other stakeholders, to develop a national welfare standard for captive animal welfare. The Vietnam Zoo National Working Group, has proposed the introduction of animal welfare regulations that will ensure better standards of care for captive wild animals.

And finally we strongly believe that good research underpins an informed approach when it comes to welfare and encourages buy in to perhaps what some people believe are emotive decisions. We are currently involved in two research projects. We’ve completed a desktop review of AVIs in over 1300 facilities around the world, identify the good the bad and the possibly ugly, with the idea of working with WAZA and other relevant bodies to help inform policy and gaps in research, and also we are carrying out a legislative and welfare accreditation gap analysis in conjunction with WAZA.

This is a quick synopsis of some of our highlights – we are involved in projects in more than seven countries and growing. The need for support to improve animal welfare in zoos is vast and I am grateful to see WAZA is embracing this need.