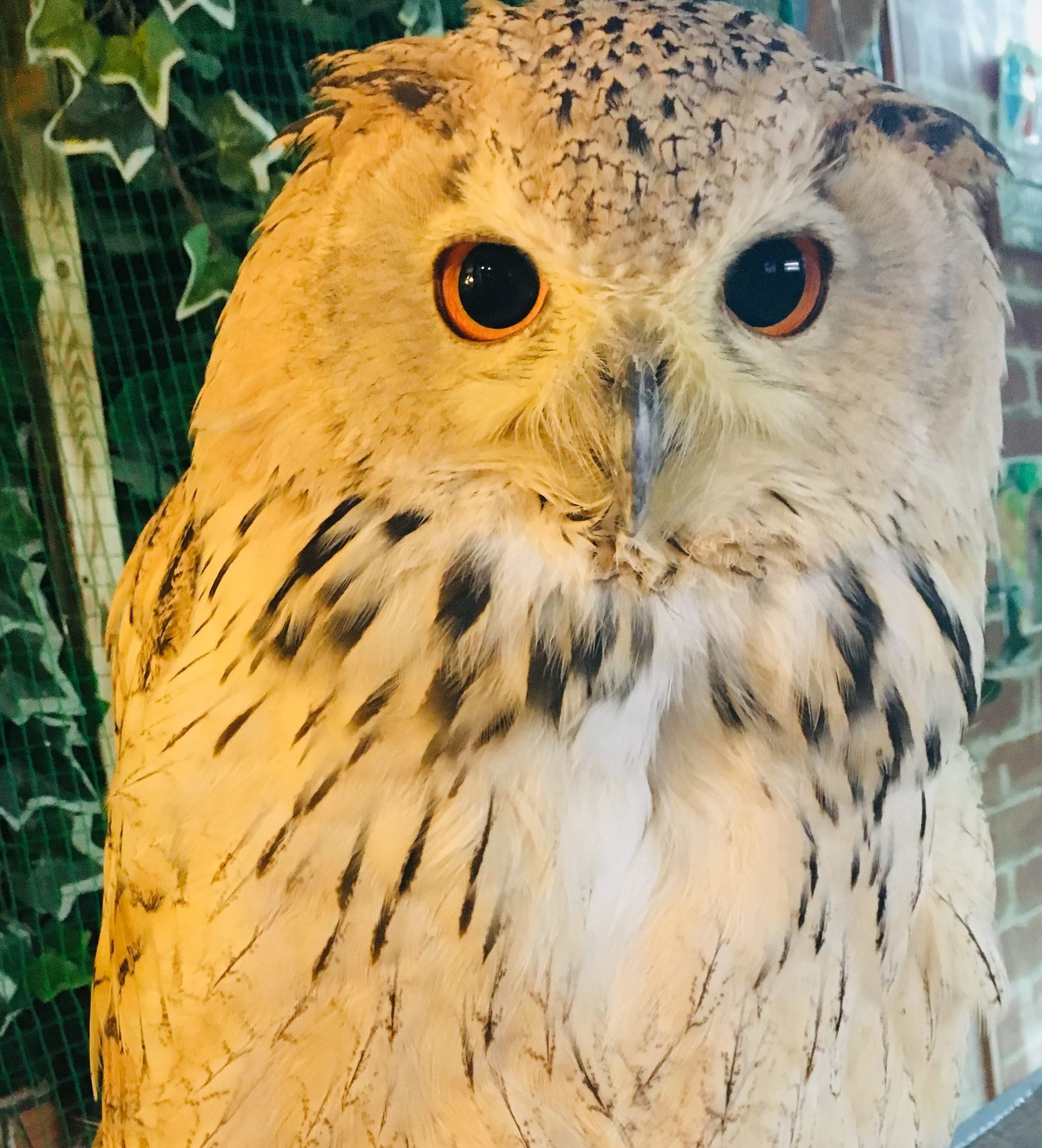 There is no denying that the Japanese love animals. Animal-themed items can be found everywhere (from clothing to saké cans), and cute animals are enormously loved within Japanese culture. This is not unexpected given that cuteness is a well-established and very prevalent part of the country’s culture. But loving animals doesn’t necessarily equate to animals having a good quality of life, and in the case of animal cafés, they can cause a deprivation in even basic daily needs, as a result of people’s desire to get up close to the cute and cuddly.

Animal cafés are not a new concept. Cat cafés have been around for quite a while, and not just in Japan. They pander to the desire to touch or hold ‘cute and cuddly’ creatures. The fascination with selfie opportunities in the modern age must surely also contribute to the proliferation of such animal cafés. Who doesn’t want to have a cute and original photo opportunity? Well, quite probably the animals for starters.

Owl cafés are a relatively new phenomenon in Tokyo, but, what exactly are they? Simply, they are somewhere you can stand or sit with owls (and numerous other animals), within a café environment, pet them, hold them and feed them. Multiple owls ensure visitors can each pet an animal and you are usually given up to an hour within the café to wander around.

To take a closer look at what goes on, on a recent visit to Japan we visited some of these cafés in the central Tokyo district of Asakasu. Asakusa is in Taitō, an area famous for the Sensō-ji, an ancient Buddhist temple and it is a popular destination area for tourists.

We discovered that these cafés do not just hold owls, but often have a variety of species to interact with – touching, petting and holding – with the prevailing theme being focussed on human entertainment and not the well-being of the animals involved. 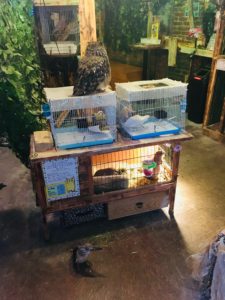 Our first stop was a café that had multiple species of owls, as well as an iguana, a meerkat, otters, hedgehogs and prairie dogs. We were greeted by an enthusiastic member of staff, who explained the rules – no holding of animals unless we paid extra, but we could pet any animal we wanted, and extra payment for food for the animals. Shortly after we went into the animal area – with no staff supervision and Britney Spears blaring out on loud speaker – a room full of huddled owls of all shapes and sizes, alongside other animals stacked in cages, on perches and in hutches crowded on top of one another greeted us.

Image: an owl and other animal species in one of Toyko’s ‘owl cafés. 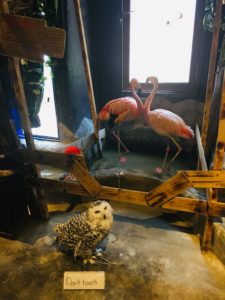 A second facility was slightly larger, which it needed to be, as it featured a wandering capybara looking for treats, two bewildered flamingos and a large snowy owl, all housed in a dark room. A single capuchin monkey and fennec foxes were among the other species housed within the stuffy building. The final facility we visited had owls lined up at the entrance, but inside were an array of other exotic birds, including the highly intelligent New Zealand kea parrot and African grey parrots. They were free flying within the café and visiting public were able to purchase any of the birds.

Image: Flamingos were one of many species found within the cafés.

Aside from the dubious entertainment offer of handling stressed and scared animals, the welfare ramifications are significant. Animals have specific behavioural needs that if they are not able to express, will lead to frustration. Humans are really no different, for example from birth we have an innate desire to explore and manipulate or handle objects – imagine if you were never given any opportunity to explore or manipulate toys, tools or other objects – life would be pretty dull and frustrating.

Animals also have certain behavioural needs that are specific to the environment they evolved in, and when placed in an environment that is very different to their natural environment, they will struggle to cope, causing behavioural stress.

A wild animal living in a city café is the equivalent to us permanently staying in a loud theme park on its busiest day, with no respite from the noise and people around us.

A number of the species we observed during our visits are nocturnal and have evolved to be physically and behaviourally active at night – fennec foxes are adapted to digging deep burrows to rest in during the day and they hunt by pounding on the ground to cause their prey to scamper out and owls have downy feathers adapted for silent flight and acute hearing during night-time. Capuchin monkeys are highly intelligent, territorial and socialise in small groups while meerkats are extremely social and can form large groups made up of many family groups. 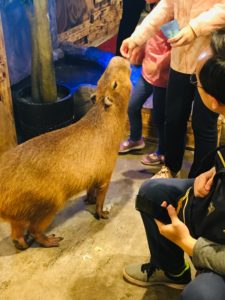 Capybaras are semi-aquatic rodents that are also extremely social, the individual we came across was pestering a young child for snacks, and with their sharp teeth and an ability to grow up to 1.4 metres in length, there is a serious human safety issue here.

Human safety put to one side for a moment, the real concern is obviously for animal welfare. We observed no attempt to provide appropriate physical and social environments for any of the animals, some of which were displaying abnormal behaviours such as repetitive pacing and feather plucking.

Species that have been domesticated by us over hundreds of generations are more adapted to live alongside humans, less afraid of us and better able to cope within artificial environments. Wild animals, regardless of whether they are captive born, are not domesticated. At best they can be considered ‘tame’ but are just not adapted to cope with environments such as city cafés. The fact that the species we saw being used and the ones that often frequent these facilities have highly complex behavioural needs that simply cannot be provided within these environments, only exacerbates the concern for their welfare.

Alongside our Japanese animal welfare colleagues, we will continue exploring this latest trend in animal entertainment and where we can, identifying and working on solutions that prioritise animal welfare.

If you are considering travelling to Japan, you can look forward to a rich and wonderful culture, but we recommend you avoid visiting these cafés. Human entertainment appears to be their priority, and your visit only risks contributing to the demand for these facilities in Japan and around the world. Be an animal-friendly tourist when you travel and take a look at all the ways you can help animals abroad instead. Read our Other Ways to Help Animals HERE.

Image © Wild Welfare: Images of animals observed when visiting a number of Tokyo animal cafés, May 2019