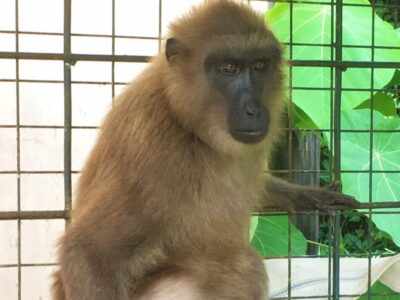 A lone macaque rescued from the illegal wildlife trade in Malaysia is being repatriated to Indonesia with the help of a UK animal welfare charity.

Siti, a female moor macaque (Macaca maura), who was illegally imported into Malaysia and kept as a pet, is being flown home to Sulawesi, with the help of animal welfare charity Wild Welfare.

Wild Welfare has launched a fundraising campaign to secure the final funds needed to move Siti the more than 1,000 miles from Lok Kawi Wildlife Park (LKWP) in Sabah, Malaysia, to Tasikoki Wildlife Rescue Centre in Sulawesi.

Wild Welfare’s acting UK director, Simon Marsh, said: “Siti is currently living alone as moor macaques are not native to Malaysia so there are no others of her kind that she can safely live with.

“Macaques are a highly social species so this is no life for Siti on her own, she desperately needs company so it’s vital we do everything we can to get her back home to the islands of Sulawesi in Indonesia.”

Moor macaques are endemic to Sulawesi, and are an endangered species, with threats to their population including human activity and habitat loss.

Siti was rescued by the Sabah Wildlife Department, the department that manages Lok Kawi, having been abandoned by her owner who illegally imported her from Indonesia to keep as a pet.

Lok Kawi Park officer, Nur’Ain Acheh, said: “We are happy to be assisted by Wild Welfare bringing Siti back to Indonesia. We can’t give her a family that she needs here in LKWP, therefore sending Siti back to Tasikoki Rescue Centre’s Macaque Sanctuary and giving her a chance to be rehabilitated is crucial.

Wild Welfare first heard about Siti when their field director was visiting Lok Kawi for an ongoing animal welfare project.

Through the charity’s partnerships and networks with animal welfare NGOs and wildlife facilities across the region, they have been able to find a new home for her at Tasikoki Rescue Centre’s Macaque Sanctuary.

Dave Morgan, Wild Welfare’s field director, said: “I knew as soon as I saw Siti that we should try and assist Lok Kawi in finding her a more suitable home.

“Macaques are inquisitive and social and should be living with others of their kind so they have opportunities to play, groom and positively interact with one another.

“Lok Kawi’s wildlife carers realised this and asked us to help Siti, and we were thrilled when we were able to find somewhere that can provide her an appropriate new home.”

Tasikoki is one of several wildlife rescue centres, set up to care for the ever-increasing volume of confiscated illegally kept and traded wildlife in Indonesia.

Tasikoki’s Rescue Centre Manager, Billy Lolowang, said: “Moor macaques are one of the most endangered species in Sulawesi. We are happy to hear that Siti will be coming back to Sulawesi and joining the social group of moor macaques that are currently under our care here.”

“One day we hope that through the rehabilitation here, Siti and the other moor macaques will get their chance to be back in the wild.”

Wild Welfare is fundraising to secure the final funds needed to pay for Siti’s flight to Sulawesi and her settlement period at Tasikoki, so have launched a Just Giving appeal sharing her sad story.

Moving Siti to Tasikoki will ensure she can have the company of other macaques, with plans to integrate her into a small group of other young rescued individuals.

Moor Macaques are Sulawesi’s most endangered species, so Siti is also very important for conservation efforts and it is hoped that the small troop she joins will eventually be released back into the wild.

The rescue and relocation of individual animals is not a normal part of Wild Welfare’s work, but is always willing to help where it can, and in 2018, the charity rehomed four Ussuri brown bears from unsuitable conditions in Japan to a specially built new home in Yorkshire, England.

The costs of moving Siti will exceed £12,000, half of which has already been secured by Wild Welfare, but now the charity needs to fundraise the final funds to secure her repatriation.

Simon Marsh, added: “Moving a wild monkey between countries is no easy task, we have to consider her health and welfare at every turn and we are still facing a global pandemic and all the restrictions that brings.

“But spurring everyone on is Siti’s plight and her desperate need to live in a more suitable home. She is alone, she is far from her native home and as a charity, we work to ensure that every wild animal living in captivity receives the best care and welfare.

“We hope that with the generosity of the public, we can raise the final funds we need to move Siti and ensure she can live a happy, fulfilled life with other macaques at Tasikoki.”

Lok Kawi Wildlife Park: Lok Kawi Wildlife Park is run by Sabah Wildlife Department under the Ministry of Tourism, Culture and Environment. The Park has a botanical site managed by Sabah Forestry Department and a zoological site, which houses a number of wild animals including Proboscis monkeys, Malayan tigers, orangutans and a variety of bird life. Find out more at: http://www.lokkawiwildlifepark.com/