Fighting My Phobia For Animal Welfare 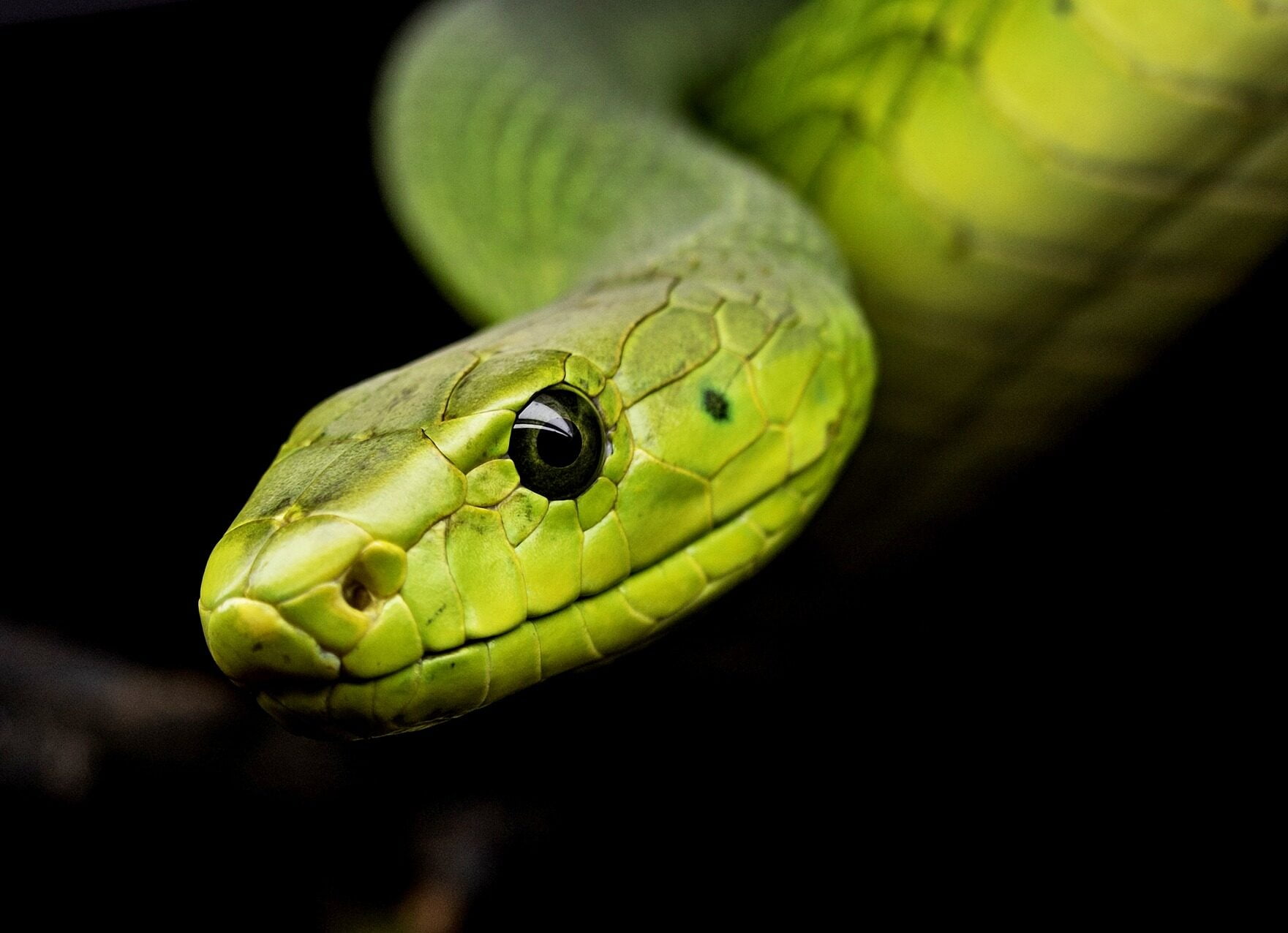 Sarah Blake is Wild Welfare’s Projects and Development Manager. She has worked for the charity for a year but has suffered with the effects of living with a phobia for her whole life. Working with animals has brought her into frequent contact with that which she fears the most, but she refuses to let it get in the way of the welfare work she is so passionate about. She explains all in our latest blog for World Snake Day.

Fears and phobias are two very different things. Phobias take over every aspect of someone’s life, particularly if that phobia is something that the sufferer comes into frequent contact with. Strangely enough, I have worked in animal management for more than a decade ,yet suffer from ophidiophobia – an intense aversion to snakes. Working for Wild Welfare brings me into relatively frequent contact with snakes. Not only do I assess the welfare of the captive snakes that we see during our in-country welfare audits and training workshops, but I also travel to countries which have a much higher prevalence of wild snakes than here in the UK. Wild Welfare works in more than ten different countries and most of them are slithering with our scaly friends. 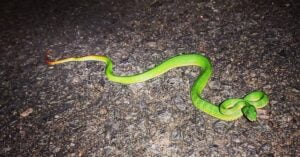 A wild white lipped tree viper that we came across during a trip to Vietnam in 2019.

So why do I do it? The answer is because I can’t not. Improving the welfare of all animals, including snakes, is equally important to both Wild Welfare, and to me.

Just because I feel fear around snakes does not mean that I wish them to suffer. I feel compelled to continue helping to make improvements towards their welfare, no matter how much it scares me. Working with Wild Welfare on issues regarding captive snakes means that I need to understand what it is they need in order to thrive rather than simply survive in a captive environment. Snakes need specific environments and many of these requirements are species specific, for example some species of snake are arboreal so require branches and vines to climb on, mimicking life in the trees. Other species are semi-aquatic therefore benefit from large ponds, and nearly all species are motivated to hide themselves away occasionally, either in a den or tunnel, or through having some form of substrate to bury into. Snakes derive a great sense of security and safety when in and under cover. This option to hide away is also hugely important when you consider that snakes are unable to shut their eyes, therefore lighting can have an impact on how they experience their environment too. 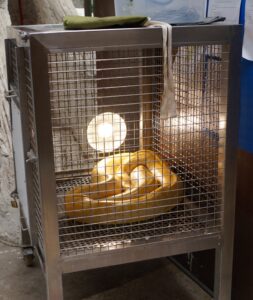 An unsuitable environment for a snake.

Another important aspect to ensure snakes experience a good standard of welfare is through providing choice, particularly regarding temperatures. Keeping snakes at the correct ambient temperatures is vital for their health but often in captivity that temperature is a static value whereas temperature changes usually fluctuate in natural environments. If a snake is too hot or too cold, they need the option to be able to move to different areas of an enclosure to regulate their temperature. I have often been required to measure the temperature of a snake’s environment in previous roles and whilst this is terrifying for me, I understand the necessity of the task.

Training other animal care staff in understanding vital aspects of snake husbandry is one way in which Wild Welfare ensures that captive snake welfare continually improves.

Snakes also have significantly more spatial requirements than has been previously understood. Recent snake welfare research has demonstrated that all species of snake have a physiological and psychological need to be able to stretch their entire body length out in a single line, in a phenomenon that we now know as rectilinear posturing. Sadly, these considerations are very seldom considered for snakes in captivity.

“So often we see snakes housed in glass-fronted boxes with little or no choice for temperature selection, no cover to hide behind or underneath, and extremely limited environments for species-specific requirements such as climbing or swimming. Too often snakes are kept under conditions of maximum convenience for their keepers and none for the snakes themselves.” Dave Morgan, Field Operations, Wild Welfare.

Reptiles can often be an overlooked group of species when it comes to welfare but there is evidence to show that reptiles are not only capable of feeling emotions such as fear, anxiety, and frustration, but also pleasure and excitement. This emotional capability needs to be taken into consideration when welfare practices are analysed and a better understanding of it helps inform actions taken to improve welfare standards.

Due to a lack of features that humans often connect with such as facial expressions and vocalisations, our attitudes towards reptiles, and particularly snakes, can still be negative. Despite my fear, I have often battled against this. Long-held beliefs about snakes that I have helped to dispel in the past include the idea that snakes are slimy, aggressive or without their own individual personalities and preferences.

Humans are also indebted to snakes for their vital role in maintaining the health of the ecosystems in which they live. Unfortunately, this if often forgotten about whilst activities such as rattlesnake roundups and using snake skins for the fashion industry persist, having a continually negative impact on both the welfare of individual snakes and the populations of snakes as a whole. If these practices are to stop, our attitudes towards snakes need to change. Whilst that may be more difficult for someone like me with a phobia, I can at least educate myself, and others, about the reality of snakes and the importance of their welfare.

I am hugely aware that my phobia is irrational. Wild snakes are far more fearful of me than I am of them. There are many harmless species out there that pose no risk to me whatsoever, but unfortunately with a phobia, that calculated logic is often ignored. But what my brain can comprehend is that there are many thousands of captive snakes in facilities all over the world that are being kept in inadequate conditions, and if I can help teach their caretakers about what snakes need, and help to improve their welfare as much as possible, then I will happily continue on this path that frequently introduces me to that which I fear the most. All it takes is a steadying breath, some reassurance from my colleagues and the understanding that snake welfare is important enough for me to feel the fear and fight for it anyway. 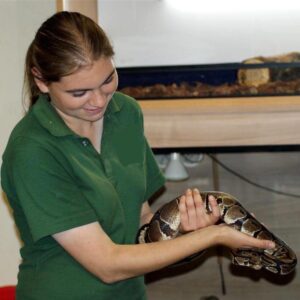 Sarah attempting to conquer her phobia. Photo by Jessica Riederer.