Honey the dolphin has died 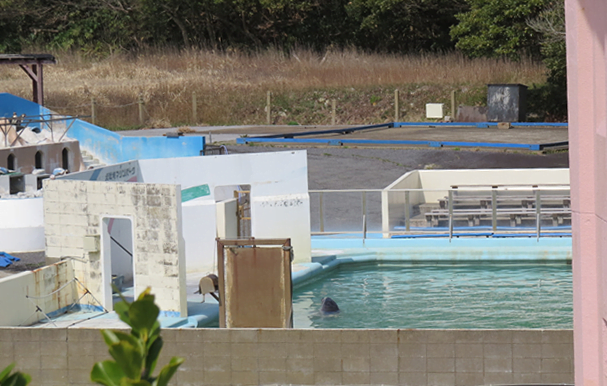 We have recently been informed of the sad news that Honey the bottlenose dolphin has died at Inubosaki Marine Park, Chiba prefecture Japan. Whist details of why she died are still being reviewed, we are also relieved she is no longer suffering.

We were made aware about Honey’s plight in late 2018, as she was being held on her own at the Marine Park alongside Humboldt penguins and hundreds of fish and reptiles. There were concerns that the animals had been abandoned after the park closed and that Honey’s health was seriously deteriorating.

Efforts were made to contact the park by international and national animal welfare NGOs and the Japan Association of Zoos and Aquariums, who offered to support and transfer the animals to a more suitable facility. However the park were unresponsive to all enquiries.

We were also informed that the Chiba local government stated that they were checking on the animals monthly to ensure they were kept healthy. Unfortunately, as a privately owned facility, there was little more that could be done for Honey at the time.

Wild Welfare’s projects director, Georgina Groves said “We are terribly sad that despite efforts by various international and national NGOs, as well as Japanese zoo experts, Honey could not be given a life worth living.

“She was a relatively young individual but had no chance. No animal should have to suffer because we want to use animals for entertainment, but unfortunately at the moment, there are limited ways to prevent this. We will continue our work in Japan, working with like-minded partners to help prevent future suffering like this.”

Honey was taken to the marine park in 2005 after being captured in Taiji. In 2015, the Japan Association of Zoos and Aquariums agreed that none of their members could purchase dolphins from Taiji. However non-member aquariums in Japan and other marine parks around the world still do purchase dolphins from this cruel drive, where hundreds of individuals are butchered or captured to be sold yearly.

One of our partners has spoken to the local government who, according to them, continue to make monthly visits to the park to check on the health of the remaining animals, namely penguins and fish.

Image source: www.arcj.org: Honey in the outside pool at Inubosaki Marine Park