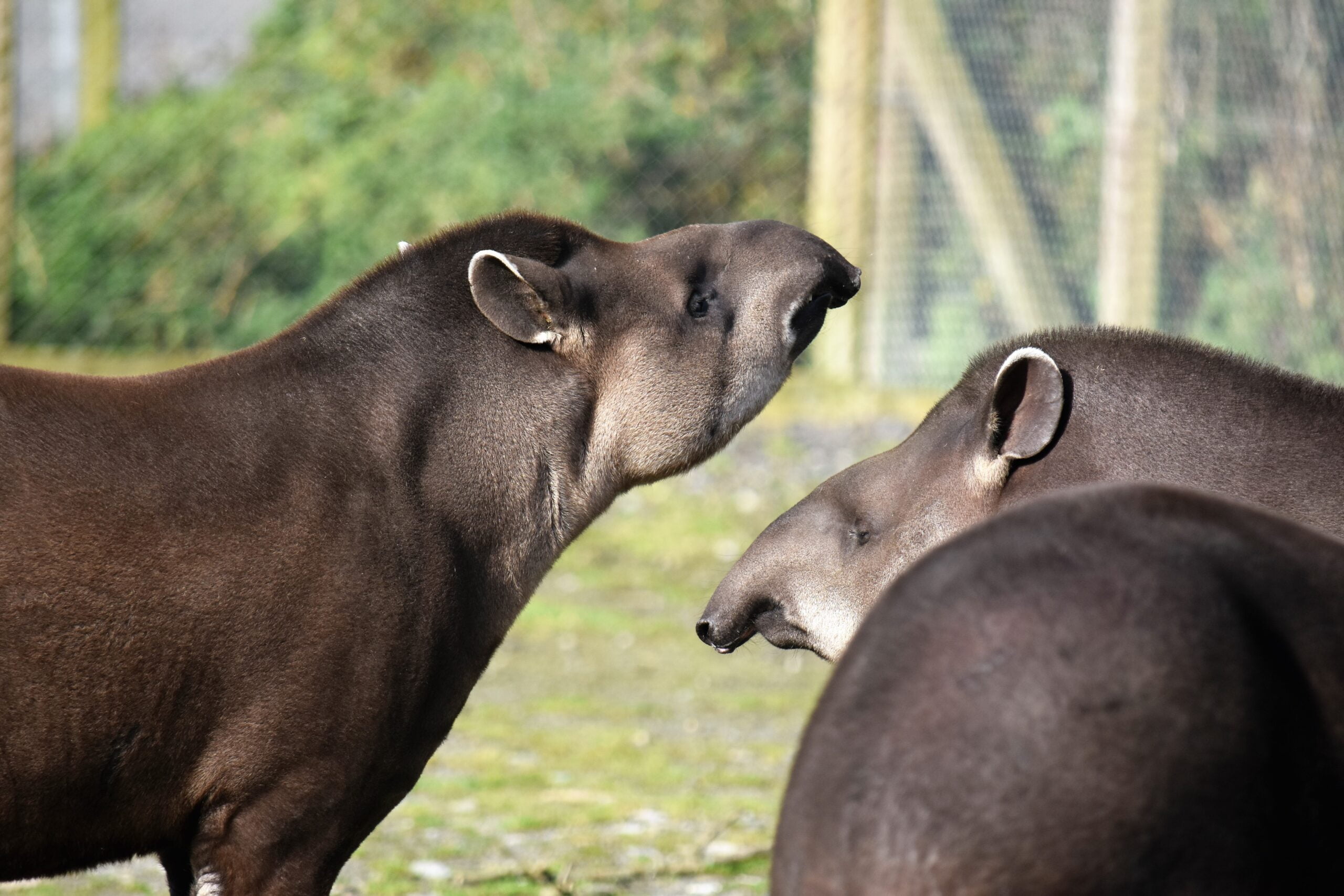 Dr Sarah Broadberry is a principal lecturer at the School of Animal, Rural and Environmental Sciences at Nottingham Trent University in the UK. For nearly 20 years Sarah has taught animal behaviour and nutrition and she is passionate about all hoof stock, but especially tapirs. Her obsession developed more than 20 years ago when a Malayan tapir caught her eye at Metro Zoo in the USA.  Since then, she has travelled throughout Europe, Asia and America visiting tapirs in captivity, including the most endangered but endearing tapir, the Mountain Tapir, and she would love to see tapirs in the wild. Sarah feels incredibly fortunate to have a role that allows her to inspire and enthuse students to learn more about, and value tapirs. For World Tapir Day, Sarah shares with us some of her knowledge on these species and the interesting facts about them you might not know.

Few animals are as frequently misidentified as tapirs: ‘It’s a pig!’, ‘It’s an anteater!’, ‘It’s a hippo’, along with other confused labels can be heard if you take the time to stand and listen by their enclosures. In the literature they are described by the fundamental roles they play in their ecosystems; as a forest gardener, a landscape gardener or a civil engineer. However, the description which resonates with me most, is that of living fossil.

Tapirs are one of the few megafauna that have persisted for 55 million years, surviving the Pleistocene extinctions, 10,000 and 50,000 years ago. From their fossil records, it is evident that they have changed little since this time (maybe Ice Age 2 was correct in its portrayal of the tapirs?). Murie’s early scientific comparison of the anatomy of a Malayan Tapir in 1871 recounts the similarities between the study subject and the skeletons of fossilised tapirs concluding “a very graduated series, such as to baffle detection of the changes from one to another”.

These living fossils can, in my opinion, be therefore viewed as perfect.

Their evolution from their early form has in effect halted, as the evolutionary pressures placed upon them remain, enabling the persistence of the species. But the tapir is now under pressures it has not evolved alongside; loss of habitat, habitat fragmentation and more recently changes in perceived cultural roles. Tapirs are suggested to be a source of illness or to be possessed by spirits in some Amazonian societies (Odonne et al., 2013). Additionally, some cultures view them as dirty due to the association of them defecating in water. However, pressures on preferred prey have seen cultures overcoming these beliefs, with tapirs being increasingly viewed as a valuable protein source in some cultures (Jernigan, 2009).

In order to consider the welfare needs of tapirs, it is worth reflecting on the evolutionary pressures that have driven their needs. Aside from their forest dwelling habits, tapirs spend much of their daytimes underwater, using their prehensile snouts as snorkels, allowing them to shelter from the sun and hide from predators. Tapirs are one branch of the order perissodactyl, more commonly termed odd-toed ungulates. So maybe it’s due to the unicorn-like appearance of rhinos, or the similarity of wild equids (zebras, asses and horses) to their domesticated counterparts, that these orders are favoured over their ‘lowly’ cousin, the tapir.

Within the family tapiridae there are three New world species (T. terrestris, T. bardi and T. pinchaque) and one Old world species (T. indicus). There is also the proposed T. kabomi, known as the ‘little black one’ by local tribes, this would be the first tapir species to be identified since 1865. It is important to note that the classification of this T. kabomi, as a separate species is subject to some controversy. Similarities found across all species are their browsing feeding strategy, a specialised hindgut and a solitary nature, inhabiting dense forest which delivers protection from predators. It is these very characteristics of being solitary, nocturnal and elusive, that present challenges when studying them in their natural environment.

But in captivity they are viewed as relatively straightforward to keep and deceptively docile and accepting of human company.

They have been shown to be adept learners, responding well to positive reinforcement training (Deane, 2017), and tactile reinforcement may be used, thus avoiding disruption of their normal diet with food rewards. Keeping tapirs in enclosures with limited browse or varied vegetation and an inability to withdraw from the public, gives a skewed impression that they are suited to an open environment.  In the wild their role as a civil engineer sees them pushing paths through dense undergrowth which opens up habitats to other species and distributes seeds. The habitats of tapirs are variable but it is their reliance on browse and fruit alongside avoidance of predators, which drives their need for forest dwelling.

In recent years, great strides have been made to improve the welfare of tapirs in captivity, including providing browse beyond its role as just enrichment and the re-evaluation of feed given to individuals, to ensure excess calories are not provided. Even though the pressures to avoid predators or to travel to locate food are removed in a captive setting, the fundamental motivations remain, so it is vital to consider how to best promote these natural behaviours and enhance welfare. And as species numbers continue to decline in the wild, this becomes ever more important.

So next time you are standing by a tapir’s enclosure pondering its welfare needs, listen out for the comments of visitors.

If you are really lucky you may find a child that is able to identify and enthuse about the tapir they are watching. If you are even luckier, you may hear the whistles of the tapirs as they communicate with their young. Don’t view their primitive nature as a negative, but marvel at a species where in evolutionary terms, time has stood still, but where their form still perfectly follows function. It is only with reflection on these evolutionary pressures, that we can enhance their future welfare.