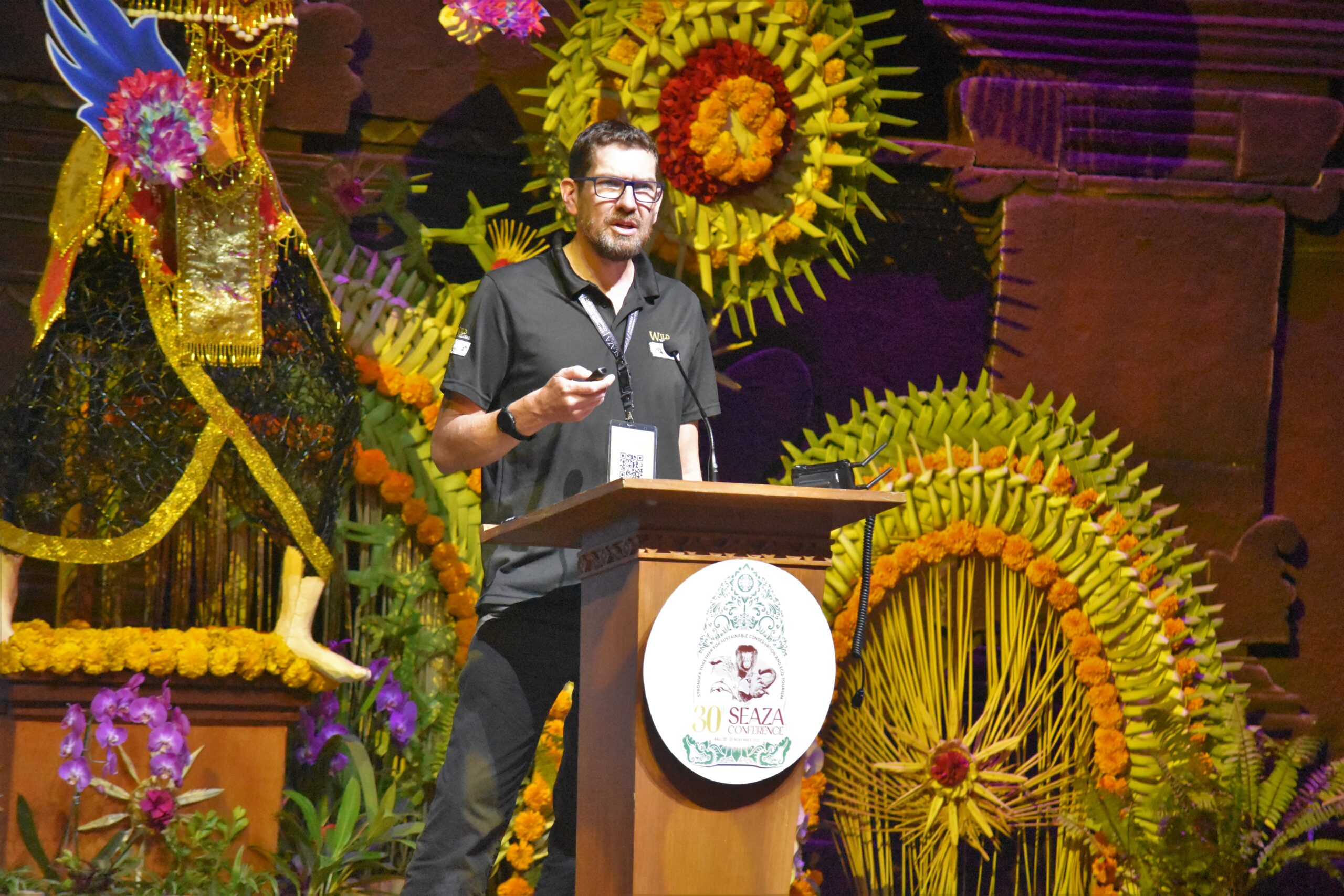 Two of the Wild Welfare team have recently returned from Bali, Indonesia where they were invited to speak at an international animal conference. After more than two years of purely virtual conference attendance, the team were delighted to be back in-country and meeting in-person again.

The Southeast Asian Zoo and Aquarium Association (SEAZA) is a regional community of zoos and aquariums whose aim is to continually improve animal welfare, biodiversity and conservation throughout its group of facilities. The annual SEAZA conference is an opportunity for idea sharing amongst SEAZA members and partners with this year’s theme highlighting how organisations can be stronger when working together.

199 delegates were in attendance, including representatives from 22 countries across the Southeast Asia region and beyond. Amongst the attendees were Simon Marsh, Director of Wild Welfare, and Sarah Bonser-Blake, Animal Welfare Field Manager for the charity. Both gave 20 minute presentations on the first day of the three-day conference.

Sarah’s talk explored the recent in-person training project in Laos and Vietnam, emphasising the importance of accessible learning materials designed to encourage knowledge and understanding of animal welfare. Simon’s talk discussed the traditional business model of zoological facilities and the narrative of conservation, education and research, highlighting the need to shift the focus towards animal welfare. Using welfare as a filter in all management and commercial decision can ensure that zoos and aquariums will deliver on their conservation and education goals.

Other topics discussed during the conference ranged from veterinary treatment of an injury in an orangutan to behavioural management methods to improve the welfare experienced by bears under human care. Sarah and Simon also took part in a workshop looking into behavioural assessments, how to identify behavioural issues or goals, and the ways in which the impact of a husbandry change can improve the physical and psychological welfare of an animal and be effectively monitored and reviewed.

“It was fantastic to see the energy and passion across so many different presentations and workshops. There was a real focus on improving animal welfare which highlighted the commitment which the SEAZA members have made in working towards improvements for their animals.” Simon Marsh, Wild Welfare Director.

Wild Welfare have been collaborating with SEAZA for several years with past projects including auditor training among its members and the development of animal welfare standards. This training and capacity building goes on to encourage changes across the 43 members of SEAZA which can improve the welfare experienced by thousands of animals living in captivity. These changes could include enclosure improvements and enrichment provision to allow and encourage natural animal behaviours such as play or foraging for food. Welfare assessments using a strategic framework also highlight where improvements can be made and the priority in which changes should be undertaken.

“The presentations by Simon and Sarah at the 30th SEAZA conference showed us animal welfare visions and goals, and how we can achieve them. Sarah’s presentation about the translated materials of Wild Welfare are a great help for us non-native English speakers, and their skit was so fun!” Kanako Tomisawa, Ph.D. Spokesperson. Omuta City Zoo, Japan.

The networks and collaborations formulated through conference attendance can be invaluable in driving forward animal welfare improvements. Wild Welfare works in over ten different countries, many of which are located in Southeast Asia, and many of the regional zoological association groups which Wild Welfare advises were in attendance.