Keynotes and Collaborations at Virtual Conference 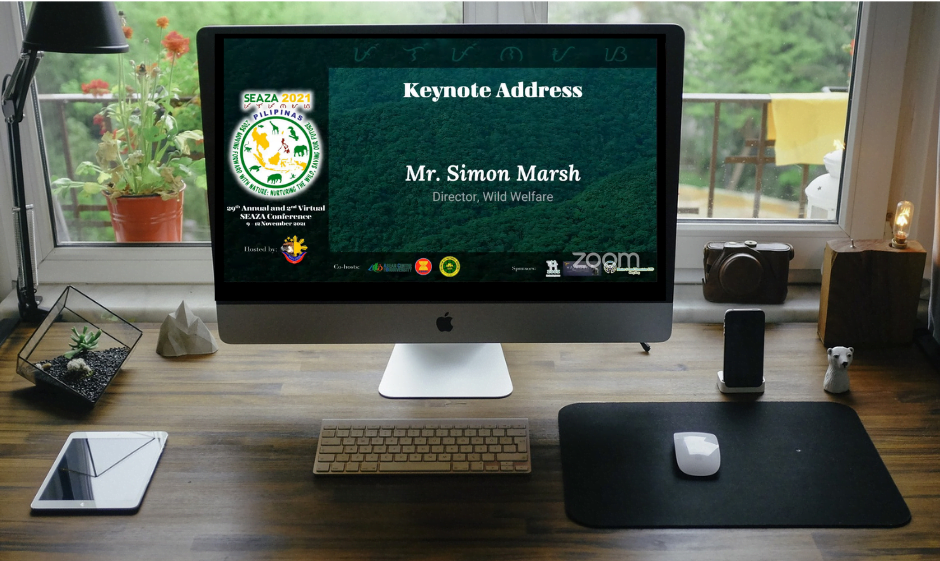 Wild Welfare has been collaborating with the Southeast Asian Zoos and Aquariums Association (SEAZA) for many years and this year was no different. Our meetings and workshops may have been virtual but collaborations have still been made for the good of animal welfare.

Three of the Wild Welfare team recently took part in the 29th SEAZA annual conference which was done entirely online. Between the 9th and 12th of November 2021, Dave Morgan, Sarah Blake and Simon Marsh all delivered presentations to the conference which was being hosted by the Philippine Zoos and Aquariums Association (PHILZOOS).

This year the theme of the conference was that of zoos moving forward with nature; nurturing the wild and saving our future. Wild Welfare’s UK Director Simon Marsh gave the keynote speech, discussing the new normal and how despite the recent challenges, the key element of all captive wildlife facilities should still be to drive forward positive changes for animal welfare.

Dave Morgan, Wild Welfare’s Founder and Field Director gave a talk about output assessment methods within captive wildlife facilities. Outputs are how animals respond physiologically and psychologically to animal care inputs – such as feeding, veterinary care, enrichment, in other words, what we “put in” to a system of animal care. Outputs are known as “Animal-based” indices and provide a more reliable and accurate measure of an animal’s overall welfare.

“We need to be able to ask an animal how it is doing and if it is happy. This is very challenging but through training and practical resources delivered by Wild Welfare, animal care staff can improve how they look after the animals, which would be the inputs. Then we can help develop a framework to ask how the animal is feeling or see if the animal is able to exhibit natural behaviours, these would be the outputs.” Dave Morgan.

The team also highlighted the Wild About Welfare digital education programme in the talk from Sarah Blake, Wild Welfare’s Animal Welfare Field Manager. The importance of humane education as an empowering tool for animal care staff was discussed with case studies demonstrating the impact that the English version of the programme has already had around the world. With the Japanese version recently launched, there was interest amongst SEAZA members who were keen to utilise the translated resource within their facilities.

On average, there were 130 delegates attending the conference each day, representing facilities from across southeast Asia. Each of the team’s talks received lots of positive feedback and engagement regarding their respective topics.

“We are always very honoured to be invited to speak at the SEAZA conference and share how the partnership between Wild Welfare and SEAZA has driven up captive wild animal welfare standards across the region. Whether through welfare assessment training, developing a standard for certification, or our Partner for Animals programme, the collaboration between SEAZA and Wild Welfare has seen many tangible improvements in animal welfare and the conference is a chance to highlight these efforts.” Simon Marsh.

During presentations from other speakers, Wild Welfare was also mentioned several times, highlighting the collaborative approach of the charity with many partner facilities and organisations being represented at the conference. Projects which the charity had helped to drive forward through training workshops and capacity building were highlighted, demonstrating how knowledge gained could be practically applied. An example of this was a talk given by one of our Partner For Animals Projects in Thailand who has developed an extensive enrichment programme since our involvement with them, and was using the conference platform to showcase it.

Wild Welfare works in over 10 different countries including many in southeast Asia, and continues to drive forward positive animal welfare changes within those countries using a collaborative approach.

SEAZA: SEAZA is the Regional Zoo and Aquarium Association of Southeast Asia whose aim is to continuously improve animal welfare, biodiversity conservation, and public awareness through their work within and beyond our institutions. Find out more at: www.seaza.asia