A lively description from our field director, on a recent experience in Recife, Brazil 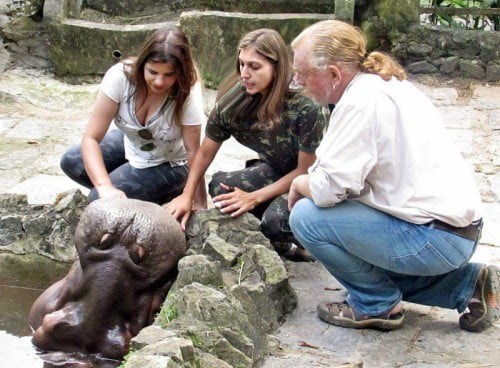 An insight into Wild Welfare’s work helping zoo animals in Brazil, with an update from our field director Dave Morgan’s latest trip to the country.

The question hoarsely issued from behind me. I had been standing at the arrivals gate at Recife Airport for nearly half an hour, inwardly cursing the fact that I had not activated international roaming on my mobile phone before leaving South Africa. There had been no-one to meet me when I emerged through the gate, and I had no means of communicating with anyone that I had arrived.

I turned to find a sun-wizened individual holding up a placard in gnarled hands. A swift glance at the placard confirmed that whilst it certainly bore my name, it was however being held upside down; a fact that the holder appeared to be oblivious of. I guardedly responded in the affirmative. “Olá Meester Dave! Estou muito satisfeito de encontrá-lo na última!”, he barked at me in rapid-fire Portuguese, gesturing animatedly with the placard. A diatribe followed that involved a great deal of gesticulation and finger pointing to the far end of the airport concourse.

When the tirade finally wound to a conclusion of deep, hacking coughs I deftly consulted Google Translate on my mobile phone. “Você fala inglês?”, I ventured haltingly. With vivid blue eyes in wrinkled nut-brown face, my interlocutor drew breath and fixed me with a gimlet stare. Unfortunately, I understood nothing the ensuing broadside save for the first word, “Não”, which I confidently took to imply a negative to my query if he spoke English. More gesticulation followed, a fist smacked into the palm for emphasis and a pointed finger suggested a directional significance that seemed to have consequence for him.

I smiled at him ruefully and as eloquently as body-language could convey non-comprehension, shrugged my shoulders. The phone however had given me an idea. I typed into Google Translate, “I am very sorry but I can’t understand you” and handed him the phone, tapping the screen to indicate that he should read it. He scowled at me initially and eyed the phone with a suspicion that slowly dawned into comprehension. “Ahhhh!”, he exhaled and continued with an interrogative, pointing at the screen. I quickly showed him the rudiments of the translation programme, and within minutes he was typing out a lengthy response.

It transpired that he had been waiting for me for some time at another arrivals gate at the other end of the airport; that my flight from Sao Paulo should in fact, have disgorged me there. How I came to be at the other end of the airport was a mystery to him and that I was lucky that he happened to come to this part of the terminal at all. Smoking was not allowed in the airport and he had not dared venture outside in case he missed me. Via the phone I thanked him for his forbearance and the temporary cessation of his nicotine habit.

A series of rich, bubbling coughs acknowledged that a satisfactory communication node had now been established. He nodded curtly, and despite his diminutive physique, adroitly shouldered me to one side and seizing my luggage trolley, set off at a brisk trot toward the nether end of the terminal.

“Vamos!” he ordered with a commanding wave of his hand. Really having no other option, I followed.

This was my first introduction to Napoleon. Napoleon was a driver employed by the Pernambuco Department of Tourism and over the next few days, he conveyed me – usually at a high rate of knots and with a spectacular disregard for other road users – around Recife. A few days later we were joined by Dr Jason Watters, Vice President of Wellness and Animal Behaviour San Francisco Zoological Society and sponsors of Wild Welfare. As one of our notable supporters, it gave Jason a chance to see how Wild Welfare functions in the field and within a zoo like Parque Dois Irmaos. The reader will recall this was one of the zoos that the Brazilian Zoo Association (SZB) had asked Wild Welfare to report on last year.

I must say that I was very pleased to observe that a number of the recommendations that we had made 10 months before have actually been followed: from linking monkey enclosures with mesh tunnels to increase special availability, to the formalisation of an internal Ethics and Welfare committee involving community leaders and local university academics. A number of new enclosures for the snakes and tapir had been completed and the Phase One construction of the new veterinary hospital, commissariat and education facilities are well underway. I was also particularly impressed by the fact that the zoo management now hold a regular forum meeting with community members to inform them of the zoo’s progress, and also to deal with any concerns or complaints that the community may have. Jason and I sat in on one of these meetings. Jason observed that San Francisco conduct similar community meetings. I have to say that I wish more zoos would conduct community liaison meetings of this type as welfare issues raised by the public could be dealt with and resolved in a spirit of public participation.

I noted too that the Park has considerably ramped up its University student volunteer programme. Parque Dois Irmaos shares a common boundary with the largest university in Pernambuco State. These volunteers are being trained in zoo-based education and environmental enrichment and in the few days that I was on site at the zoo, there were at least half-a-dozen volunteers performing various tasks.

The Park’s director George de Rego Barros told me that whilst Phase One was well down the line, they had secured state funding for Phase Two which is to involve an extensive re-build of all exhibits following a pre-designed masterplan. Jason and I were shown a presentation of this masterplan – and most impressive it was too. George says that capital for this masterplan was raised through a special state environmental tax on private companies.

Of particular interest to both Jason and I is the Three-toed Sloth rehabilitation project that the Park has operating. The Park receives several injured or orphaned sloths fairly regularly – usually victims of power-line electrocution. Injuries – most frequently burns – are treated and volunteers care for the sloths on site at the zoo. Orphans are hand-raised but socialised using an elderly non-rehab female sloth who has strong maternal instincts. The sloths are released into the 1000 hectare Dois Irmaos conservation area that adjoins the Park.

The day of my departure dawned and I inserted myself into the car for the trip to the airport. I was starting to drift into a light doze when Napoleon abruptly brought me back to my senses.

“Batsard!” he screamed without warning. “Idiota!”

He whipped the steering wheel violently to the left and the little Fiat Uno lurched unsteadily on shock-absorbers that should have been replaced years ago. The car shot past the object of Napoleon’s ire, an oncoming bus bedecked with centimetres to spare. I rammed my elbow against the car door in an attempt to maintain a cool and collected demeanour whilst still remaining upright and affected what I hoped was a calm expression on my face.

The bus driver expressed his own displeasure with an indignant bray of car horn. Napoleon clicked his tongue and flung a universal single finger gesture out of his window as we accelerated with total abandon down a street crowded with vehicles of every single conceivable age, condition and species – and all of them proceeding in various directions without any apparent regard for the rules of the road.

“Batsard”, growled Napoleon in more of an undertone this time, his wrath dissipating with the same rapidity that it had appeared in the first place. With a negligent twitch of his wrist he skilfully zipped the car past a scooter that had suddenly materialized in the road.

In an effort to distract myself from our suicidal progress, I enquired as to how Napoleon acquired so imposing an appellation. Through the auspices of my phone, Napoleon informed me that he came from a large family of six brothers and one sister. His father it seemed, was a great admirer of the French general and for reasons best known only to himself, had named all his sons “Napoleon”. Apparently he distinguished between them by giving them numbers according to their birth. Our Napoleon being the youngest, he proudly told me, was “Napoleon o sexto” (Napoleon the sixth).

“What was your sister’s name”. I asked. “Josephine perhaps?” I queried with heavy irony.

Image: Dave Morgan on a zoo visit in Brazil