Why circuses are never good for animal welfare 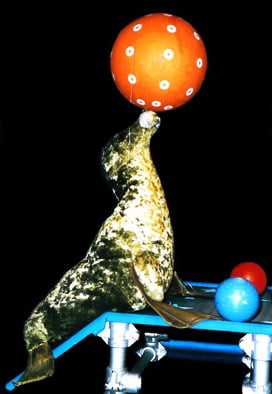 There’s nothing natural about monkeys riding bicycles, a muzzled polar bear standing on its hind legs singing into a microphone or a tiger jumping through rings of fire, yet this is what circuses are – animals being forced to behave in a way that is as far removed from their natural state as one might imagine.

Good animal welfare encompasses the fulfilment of an animal’s physical, psychological and emotional needs. Being fed a suitable diet is a given for good animal welfare, yet in the circus environment animals may be denied their normal meals in order that they better perform tricks and behaviours – motivated by food rewards. Good welfare states a suitable environment should be provided for an animal, this covers anything from the correct lighting and heating to being housed in an appropriate social or family group. The set-up of a circus is such that animals are moved around the country, sometimes even between countries, which involves being housed in secure, easily transportable accommodations. These are almost always wholly lacking in regards to the animal’s normal environment, they provide little or no opportunity for exercise, socialisation or for the animal to perform any of their normal daily routines. They are, quite simply, just boxes, where they eat, sleep, and languish, taken out to perform and entertain, then put back until the next show.

The ‘affective state’ or psychological well-being of an animal is also paramount for positive welfare – an animal’s overall subjective feelings and experiences, their positive or negative emotional states and the balance of the two are key. So ask yourself, how does that polar bear feel when a tight metal muzzle is placed around its mouth? The polar bear who does not instinctively walk on its hind legs. The polar bear that is hit while young, so as to submit – because that polar bear in the wild can kill a seal with one swipe of a forepaw. And what exactly are that group of monkeys thinking when they’re riding round and round on bicycles, a group of monkeys that use their prehensile tails to live an arboreal life, swinging and climbing, grasping food and grooming each other high up in the canopy.

And finally, consider just what goes through the tiger’s mind when it is forced, with a whip if necessary, to jump through that ring of fire, when every instinct is telling it to flee. It’s fire, it’s danger, run! In the wild fire breaks out and animals run for their lives, they move to safety, they get far, far away. So just what force does it take to ignore those instincts and jump head first into that fire. It takes human force. It takes the absence of any kind of measurable, acceptable animal welfare practices. Circuses provide nothing for animals but an unnatural environment, and when it comes to an animal’s welfare, that’s enough to know they can never be a suitable place for them.