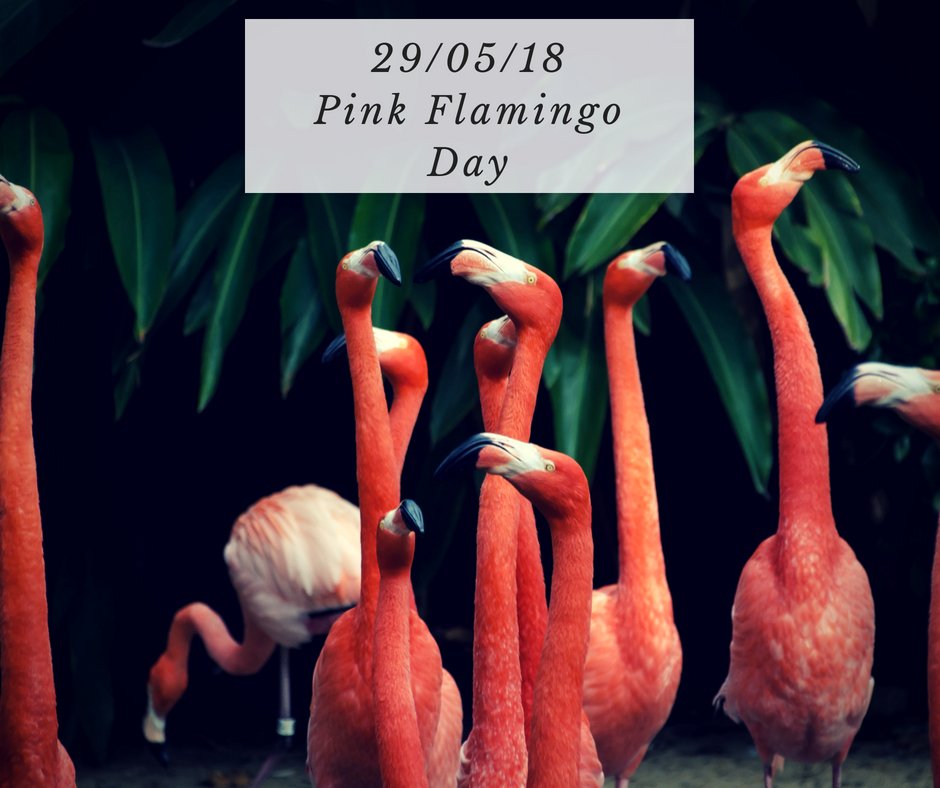 It is traditionally a day that celebrates having toy flamingos in front gardens and yards, but we did not want to miss out on the opportunity to celebrate flamingos!

The colour of flamingo feathers is actually a result of their diet. Pigments in their food (called carotenoids) are responsible for the red and pink colouration of their feathers.

Thanks to DNA analysis, we know that flamingos are also related to grebes, small water birds that feed on small fish and crustaceans.

Flamingos are extremely social and can live in flocks that reach their 1,000s!

Zoos have been successfully keeping flamingos in captivity for decades, however unfortunately many exhibits still hold flamingos in open top habitats, meaning they must pinion the birds to prevent them flying away.

Pinioning is the act of surgically removing one pinion joint, the joint of a bird’s wing farthest from the body, to prevent flight. It is an irreversible procedure, unlike feather clipping, where eventually the feathers will grow back and so must be repeated to prevent flight. Pinioning also prevents the birds from running at speed (due to reduced balance) or carrying out complicated courtship displays. It has also been shown that reproduction can be hindered by pinioning, due to the male’s difficulty in balancing himself during copulation. However pinioning does prevent flamingos from potentially getting injured from flying.

But, does this reduction in the threat of injury really outweigh taking away their ability to carry out the most natural basic behaviour and freedom that is flying? Forward-thinking zoos are starting to think not, and are looking for alternative ways to manage flamingos, allowing for normal and natural behaviours such as flying to be expressed.

Roger Sweeney, General Curator of North Carolina Zoo told us “While pinioning is still widely practiced in the USA by the private waterfowl collections, zoos are moving towards discouraging the practice…The AZA encourages zoos towards using reversible methods of flight restriction and advise their members develop a written policy on if, when, and how flight restriction is employed.”

Within the UK, the practice is not banned but can only legally be carried out by veterinary surgeons. Within the EU the practice is only banned in Austria, but other EU states can still carry out (and do) pinioning.

Animal movement in captivity is always restricted in one way or another, however as a moral consideration, preventing basic freedoms such as flight in birds should be challenged within the 21st century zoo. Leading zoos can do just that, supporting the way for more innovative facilities that prioritise animal welfare at all times.