Positive changes for the animals at Chiang Mai’s ‘mini zoo’ 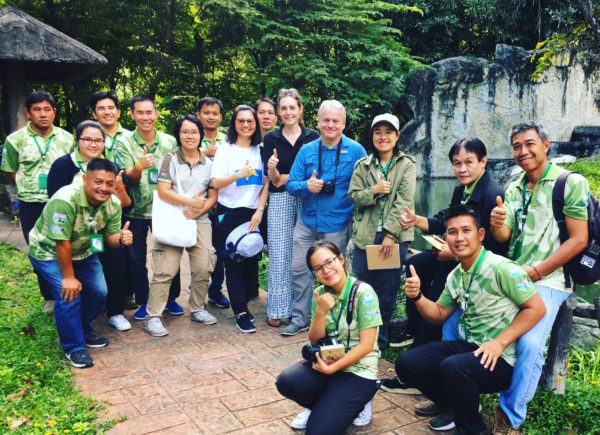 Wild Welfare is thrilled to report on the positive improvements being been made for the animals in Chiang Mai’s ‘mini zoo’.

In February this year, Wild Welfare visited Thailand’s Chiang Mai Zoo, as part of an invited visit to the Zoological Park Organization of Thailand (ZPO)’s facilities, to give recommendations on their mini zoo area and a few selected areas of the main zoo.

Returning to Thailand recently for the Southeast Asian Zoos and Aquariums (SEAZA)’s annual conference, our team was invited by Chiang Mai zoo’s director, Mr Wuthichai Muangham, to re-visit the zoo and see the improvements they had been making following our advice.

Wild Welfare’s projects director, Georgina Groves, said: “Around 20 zoo staff greeted us and were all really keen to show us the changes they’ve been making, and more importantly, how they’ve been monitoring the impact of the husbandry changes made, on the animal’s well-being.”

The mini zoo houses small mammals including rabbits, porcupines, reptiles, tortoise and black squirrels and the February visit highlighted some key areas where improvements were needed. For example, many of the animals had no place to retreat from the public and the enclosures were not offering suitable variety or challenges that encouraged basic natural and positive behaviours.

Our recommendations included how they could make enclosures more stimulating and how to monitor the use (or not) of different enrichments given to the animals to encourage positive, natural behaviours. The zoo has a small team dedicated to providing enrichment and they are encouraging the keeping staff to apply everyday enriching opportunities for the animals in their care. We were particularly impressed with Tong Sudsakorn’s commitment to making positive changes. He showed us case study reports on enrichment use and enrichment calendars recording when and why they are doing enrichment and the behaviour changes they are monitoring to determine how successful it is or not.

Georgina Groves, added: “There is no value in simply adding a toy or a food item simply as a distraction, it needs to be an enhancement to the animal’s overall environment and it must encourage those natural and positive behaviours that they would display in the wild.

“It was really impressive to see that enclosure infrastructure and enclosure enrichments are now being used to encourage positive behaviours. Staff are really thinking about individual animals, what specific behaviours they have – be it climbing, foraging, digging – and they’re developing the animal’s spaces to encourage these activities.”

Wild Welfare also gave staff recommendations for some areas of the main zoo. Parrots previously housed in an off-exhibit area which was unsuitable, have been moved to a larger aviary where they now have the opportunity to fly, and the team caring for the zoo’s hippos took our advice on public feeding. Unregulated public feeding was leading to the hippos developing begging behaviour and only using one part of their enclosure. Public feeding is now regulated and they feed three times a day in different areas of their roomy enclosure, encouraging the hippos to explore the space.

The zoo has made several key changes which have meant positive improvements for a variety of their animals, including the black squirrels, bearded dragons and iguanas, rabbits, hippos, porcupines, prairie dogs and parrots.

Here are some of the highlights:

Georgina Groves added: “Importantly, what was so wonderful is that we are seeing a culture of change within the zoo as the staff are recognising why the positive animal behaviours they’re observing are so important for animal welfare.

“There is plenty to do still and we’ll continue to make recommendations to further improve the enclosures observed, but it’s little things that make the big things happen and what’s so rewarding to see is that the zoo has instilled change so quickly as a result of our work together.”

Chiang Mai Zoo plans to continue making further changes, and with the new SEAZA welfare certification programme approaching fast in 2019, are determined to meet and exceed the high animal care and management standards it will set out.