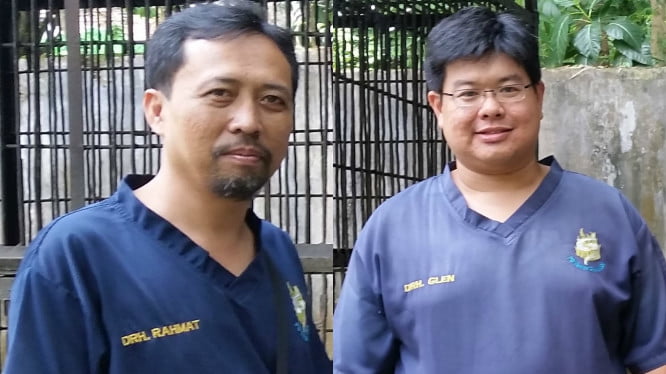 Wild Welfare’s field director, Dave Morgan, was at Surabaya Zoo this month, on our first visit of 2017 to Indonesia. Mr Morgan was delighted to see improvements for several of the zoo animal’s enclosures and in their overall welfare conditions.

In November, we reported on the zoo’s Javan Sun Bears, who were housed in very small quarantine facilities. Dave was pleased to see two of the seven bears now in a refurbished space. This is a huge improvement for the bears, with more space and infrastructure to use, and is down to the hard work of the zoo’s vets, who instigated the move. Mr Morgan said: “Drh Glen and Drh Rahmat have wanted to move these bears for a long time and it’s great they have now managed to get two of them into a new enclosure. The bears look in very good condition and I am very happy. Now we just need to get the other bears moved.”

The zoo has limited facilities for animals like bears. There are 15 Sun Bears currently at Surabaya, most of them confiscations from the illegal wildlife trade, which have been placed at the zoo by the Government Department of Forestry and Environment because there is no alternative suitable home for them.

Mr Morgan also spent time visiting Surabaya’s elephants and saw some encouraging welfare improvements. He commented: “The older elephant bull is now permanently off-chain – unless he is in musth, when he is chained for his own safety and that of his keepers. Unfortunately as a mature bull, and as is their wont to be somewhat unsociable, he is housed in an area on his own.”

The zoo has a total of five elephants. In addition to the older bull, there are three cows and a young bull, who are all now kept off-chain.

“All the elephants are walked around the zoo first thing in the morning several times a week and the three cows are used for visitor rides on weekends and public holidays. Wild Welfare is not in favour of visitor interaction of this type, but it does represent some exercise and mental stimulation for the elephants,” said Mr Morgan. Due to the older bull needing to be housed alone, the remaining individuals currently have a small enclosure, in need of upgrading and better enrichment.

The feet and toes of all elephants were observed to be in very good condition and one of the zoo veterinarians, Drh Glen Kartek, explained that all elephants have undergone training to present for veterinary examinations, which take place monthly.

While visiting Surabaya, Mr Morgan met with the new CEO, Pak Chairol Anwar, who has implemented a major clean, tidy and refurbishment around the zoo. There is a masterplan in place – a project into which Wild Welfare has had important input – will see the zoo’s redevelopment and incorporates new facilities for the elephants and bears, among many other animals. Before the plan is fully underway, the upgrading and maintenance already needed for some enclosures will go ahead, which was more welcome news.

Mr Morgan added: “There is still a way to go here, but I am pleased with the ongoing progress at Surabaya Zoo.”