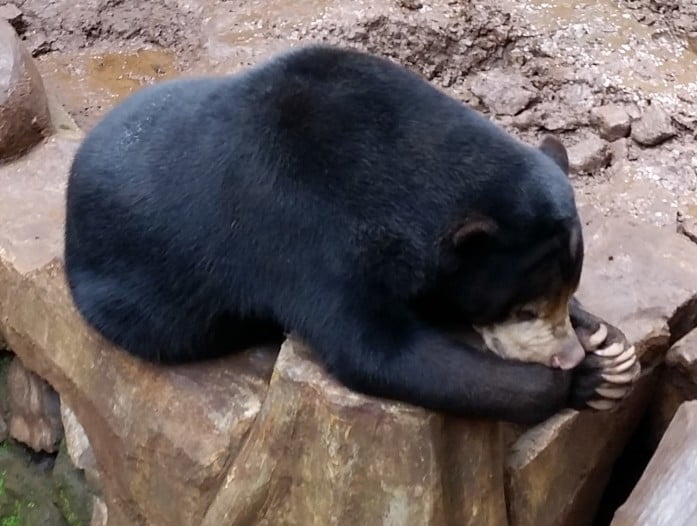 Wild Welfare has been working in Indonesia alongside the Indonesian Zoo Association (PKBSI) to improve the standards found in zoos. In response to the circulation of images at Bandung Zoo, Wild Welfare visited the zoo on the February 11, 2017.

Our field operations director, Dave Morgan, was joined by Dr Ligaya Tumbelaka of the Indonesian Zoo Association (PKBSI), Pak (Mr) Bisma Romli of the Bandung Zoo Foundation, Pak Sudaryo the general manager and the two vets employed at the zoo, Drh Josephine Bernadette and Drh Dedi Trisasongko who showed us around the facility.

The sun bears within the zoo are held in traditional European ‘bear pit-style’ enclosures, except for one.  Our own concerns lay more with the expression of begging behaviours by the bears as a consequence of public feeding and the basic, poor enclosures the bears are held in. One bear is currently held off-exhibit , with plans to introduce this bear to the main enclosure shortly. The main bear exhibit at the front of the zoo and the one featured in recent film clips, was being renovated at the time of the visit. This has entailed draining the moat – which we had suggested to management last year, as it served absolutely no purpose – and terracing the enclosure which has increased the overall space of the enclosure.

The terraces were being filled with sand and soil to allow digging and the lower level is to be filled with leaf litter. Additional logs and branches have been added and a large living tree is in the centre of the enclosure which the bears are allowed to climb. The bears were shut in their dens during the renovation so Mr Morgan was only able to view the bears through the den doors. Mr Morgan said: “Frequently, bears in zoos where unrestricted public feeding occurs tend to be morbidly obese. However, overall the physiological condition of these bears looked fairly good.”

The second bear enclosure is scheduled for similar renovation in late February. Mr Morgan said: “I do have other concerns with these particular bears as one individual is considerably larger in size than his enclosure mates and we noted last year his tendency to dominate the others. Also, the overall enclosure is small. They need to provide more climbing opportunities and soil/leaf litter mix in the dry moat at the bottom, to encourage more natural and positive behaviours. Notwithstanding, both sets of bears absolutely require an active programme of ongoing enrichment.”

Mr Morgan noted that the off-exhibit bear was in temporary quarters that are completely unsuitable and observed to management that the bear has to be introduced into a larger enclosure without delay. “Ideally all these bears need new, larger and more complex enclosures  – and to be split up into smaller groupings.”

Following recommendation made in 2016 by PKBSI, Bandung Zoo has embarked upon a much-needed plan of upgrading and renovation which includes the bear, elephant, monkey and orangutan enclosures. Sadly Mr Morgan observed that much of the zoo remains rather unkempt and poorly maintained. He noted that whilst it has a garden ambiance and some very nice aviaries, the stand-off barriers, signage and enclosure structures are all showing considerable wear and tear. “Many of the enclosures are too small for the species they contain and generally-speaking are of completely out-dated design,” Mr Morgan said.

The PKBSI has committed itself to performing regular oversight at the zoo for the foreseeable future and Wild Welfare will assist with technical expertise. Mr Morgan said: “We are working very closely with our PKBSI colleagues on a number of projects, of which Bandung Zoo is but one.

“In collaboration with the Department of Forestry and Environment, PKBSI are putting in place mandatory standard upgrades for their members. Wild Welfare has already given significant input into this process and will continue to do so. I plan on being in Indonesia several times this year and will most certainly be visiting Bandung Zoo again in a few months’ time to check on progress.”