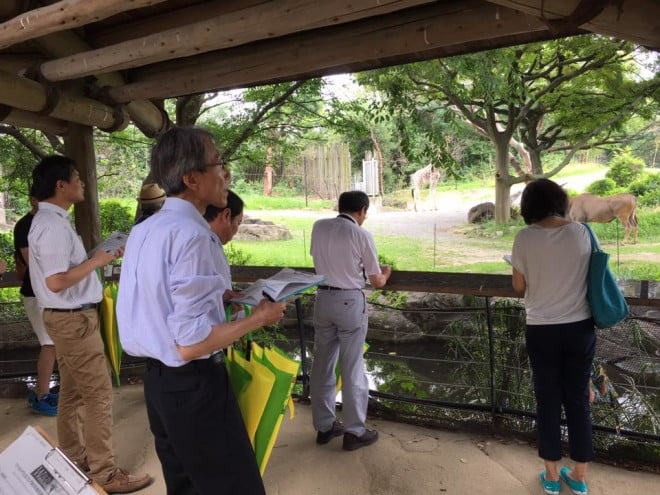 The Wild Welfare team has been in Osaka and Tokyo in Japan, training The Japanese Association of Zoos and Aquariums (JAZA) members in animal welfare management.

Around 50 JAZA members attended two two-day workshops on animal welfare management and assessment. One afternoon of each of the two workshops was dedicated to practical training and were held in Tennoji Zoo and Ueno Zoo respectively, enabling delegates to learn from Wild Welfare staff how to effectively monitor, evaluate and improve standards for their facility’s animals. From “What is Animal Welfare?” to “Animal Records, Nutrition and Assessment”, delegates attended more than 14 hours of training on best practice animal care.

Georgina Allen, Wild Welfare’s projects director, said: “We are thrilled to have this opportunity to support JAZA members. Huge thanks goes to both Tennoji and Ueno Zoo for allowing us to use their facilities for critique and analysis, enabling zoo staff to build on their existing animal welfare knowledge.”

JAZA has recently updated their animal welfare and ethics policy, but it does not have an accreditation system or a means to monitor and evaluate animal welfare within its membership. While Japan has an Act on Welfare and Management of Animals (1973), there is also currently no existing guidelines that appropriately protects wild animals in captivity in Japan and with around 300+ facilities, a large number of them have extremely poor animal welfare conditions. With a growing increase in the concern for their welfare from the general public, it is more important than ever that JAZA members demonstrate a high standard of care for their animals.

Executive director of JAZA, Etsuo Narushima, said: “This was a unprecedented type of workshop for JAZA, with over a third of our members attending the two workshops. It was a good opportunity for managers and directors to realise the importance of welfare self-assessment in their zoos and aquariums. We hope this leads to an accreditation system for JAZA in the future.”