Vietnamese Actions: Notes from the classroom 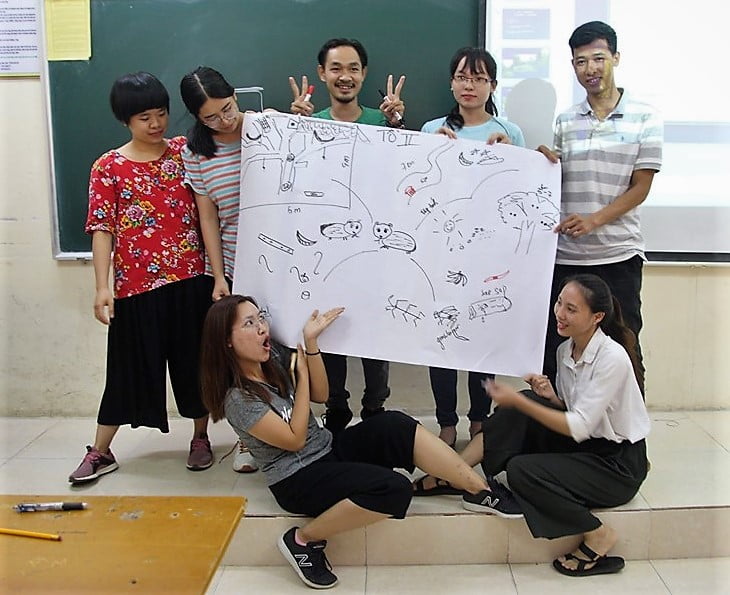 Mark Spicer is a technical advisor for a Vietnamese organisation called WildAct. The charity is based in Hanoi, Vietnam and has recently partnered with Wild Welfare to help us to achieve our mission of improving animal welfare standards through capacity building within the country. In this blog, Mark discusses the impact WildAct has on young conservationists in the making and how this can impact the welfare of animals within Vietnam and beyond.

The focus of WildAct is on education and professional training around biodiversity conservation and the environment, with a focus on the under 25s. As part of this, we work with teachers, pupils, schools and rangers in remote areas to help develop an understanding of environmental issues, run nationwide training courses on combating wildlife trafficking and organise initiatives to encourage more environmentally sustainable practices. While our work here is varied, I have written a few words about one crucial part of that, and why it matters both to Vietnam and beyond.

Vietnam has an astonishingly rich fauna and flora, ranked 16th in the world. The country has many endemic species which can be found nowhere else in the world, but a few decades of rapid population expansion and urbanisation, coupled with a history of conflict, deforestation and exploitation, have left many of these species vulnerable to extinction. Primate diversity is very high but 11 out of the 24 species of native primates are classed as critically endangered, including the Cat Ba Langur of which only around 70 remain.

The threats facing species in Vietnam are all too familiar, but there is also the grim reality that the country has not only become a major consumer, but also a major supplier and a transit point for wildlife products.

The array of fauna involved in trade within Vietnam is staggering, including around 150 terrestrial vertebrate species (according to the Convention on International Trade in Endangered Species of Wild Fauna and Flora – CITES). A similar number of invertebrates are also involved. The illegal trade of the most high-profile species and products: rhino horn, elephant ivory, tiger parts and pangolin scales is a prolific problem within the country. Whereas the horn and ivory trade leaves behind distant carcasses, tigers and pangolins are traded both alive and dead. In the wild there are very few Indochinese tigers left in Vietnam, if any, and an unknown number of the two pangolin species, yet seizures still occur, and with alarming frequency.

Countering this trade is very clearly a key part of Vietnam’s conservation strategy, and many international conservation organisations are active here, in one form or another. As awareness grows in the country there is an increasing number of citizens eager to get involved. Local, grass-roots organisations all over the country are raising awareness of environmental issues and mobilising people into clearing waterways of plastics and so on. Unfortunately, there is no formal, recognised training available here on topics such as biodiversity conservation or animal welfare so students must seek scholarships and other opportunities to travel abroad to study. While economic reforms over the past few decades have radically shifted the country from one of the world’s poorest to a lower-middle income nation, the reality remains that such opportunities are not readily available for most young Vietnamese. Consequently, it can be a significant challenge for motivated, passionate young people to acquire the critical combination of education, experience and networking skills to enter the field.

In response to this, we designed Vietnam’s first ever, government-recognised short courses in both combating the illegal wildlife trade and captive wild animal welfare.

With so many live animal seizures within Vietnam, and no formal training available to officials or NGO staff who must then take care of them, welfare is a major issue and is indicative of the requirement to build capacity. WildAct’s courses, offered as master’s modules or as stand-alone diplomas are aimed at addressing the three areas mentioned above: education, experience and network.

Through the commitment and dedication of both the conservation community and government bodies from Vietnam and beyond, we are able to bring a huge amount of experience together in one place, allowing participants the opportunity to meet and hopefully impress potential employers while learning from them. The students are required to undertake work experience, in which our conservation NGO partners have been extremely supportive. Participants are encouraged throughout the course to engage with each other and our guest speakers at every possible opportunity. The conservation world is a small one, so the value of networking can never be understated. (I met WildAct’s director while at university, and now I am working for the organisation).

Once our students graduate, we continue to support them with career advice, alerting them to opportunities, helping with CVs and preparing them for interviews. It is early days for our capacity building program, but the model seems to be working, with all of the participants from our first course now employed in varied positions within Vietnam’s NGO sector. They have come to us from diverse backgrounds, and are now in diverse conservation roles (fieldwork, marketing, veterinary work etc) but it is encouraging and gratifying to see them entering the workplace within Vietnam and working towards their own career goals. They’ve also kept in touch with each other, further strengthening their own network which can make a massive difference when you are working against odds which can feel overwhelming.

Vietnam can be a challenging place to work, in many ways. There’s multi-layered bureaucracy, difficulties of language, a social and professional culture unlike any I have experienced elsewhere, deeply entrenched gender roles and, of course, a major biodiversity crisis in a country set to be hit hard by climate change. With all of that as a background, the ability to work with and for people who have made a decision to make a difference, and to work towards improving their country’s future, with a more resilient environment and with the nation’s remarkable biodiversity in mind, is both inspiring and uplifting, and serves as a much-needed reminder that there really can be good news in conservation.

Wild Welfare will be visiting Vietnam and linking up with WildAct in late November of this year. For more information about our Vietnam project, click here. We look forward to working alongside this fantastic organisation and working collaboratively in order to slowly but surely improve the animal welfare situation within Vietnam as much as we can.