Who Really is The Saddest Animal in Captivity?

Is it the lonely elephant or the depressed polar bear? 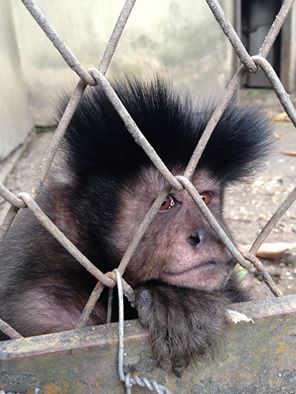 Lately I’ve been experiencing déjà vu. It seems every article I read on animal welfare concerns in zoos or aquariums is titled something along the lines of “The Loneliest/Saddest Animal in Captivity”. And there are some tragic stories out there. With the number of captive facilities around the world potentially numbering between 7,000 and 10,000, with many having little to no welfare regulations, the potential for suffering of animals confined within these facilities is immense.

But who really can claim to be the saddest animal in captivity? Is it the lonely elephant, left on her own for forty plus years in a sterile enclosure, or the depressed polar bear, held in such a tiny enclosure, he can’t even carry out abnormal pacing? Either of these could be potential ‘winners’ of that unwanted title. It is common knowledge that the cute, fluffy and enigmatic animals gain more recognition in their conservation plights, and it is safe to assume that the same goes for their welfare too. However, what about the rest of them – the not so cuddly animals – could they in fact be the saddest?

What about the flamingo that is pinioned (the act of surgically removing one pinion joint of a bird’s wing to prevent flight)? Or the white mouse kept in a simple plastic container for the entirety of its short life, a life that ends by being fed to hungry predators with no way of escape? Or the animal brought out simply to perform, while the rest of the day it is held in a small concrete enclosure until the next chance to entertain?

Or are the saddest animal situations even more subtle? The reptile that isn’t provided appropriate UVB light, resulting in painful bone deformities? The bird that has an innate desire to migrate yet can’t within the confines of its enclosure? Or the nocturnal animal repeatedly used in a daily interactive show?

We may never know the true cost of captivity, as an animal’s welfare is subjective, intrinsic and fluctuates over time. What we do know is that how we manage these animals impacts directly on their well-being, from before they are born up until their deaths. The animal management decisions we make on a daily basis are really a reflection on ourselves and our own beliefs about how animals feel or matter, and we do not always get it right the first time around. But it is knowing this and changing how we manage animals that shows our true commitment to improving the lives of animals that depend on us. This is being seen in the good zoos that have always had welfare at the forefront of their agendas, understanding the individuality of those in their care and what their needs may be. Unfortunately, many others are not.

Every individual animal wants to live a life worth living and has an intrinsic value beyond what we may nominally place upon it, whether that be as an animal to entertain or one that is deemed genetically worthy of being part of a breeding programme. Perhaps, as we embrace this concept more, the chances of the world’s saddest animal actually belonging in a zoo or aquarium will decrease.