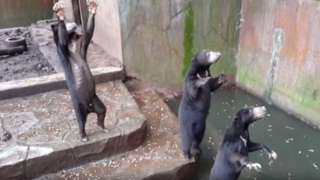 Wild Welfare has been following the news about the sun bears at a zoo in Indonesia closely and the subsequent reports of concern for the animals.

Last year Wild Welfare held a small veterinary and animal welfare training workshop at Bandung Zoo in Indonesia, in collaboration with the Indonesian Association of Zoos (PKBSI), and veterinary personnel from PKBSI member zoos. We are aware of welfare issues within the zoo, including the poor enclosures and responsive begging behaviours in the two groups of sun bears held there.

Wild Welfare has been working with PKBSI and the Southeast Asian Zoos and Aquariums Association (SEAZA) for the past two years, supporting the development of core veterinary and animal welfare training programmes and making improvements for animals in a number of Indonesian zoos, including Bandung Zoo. We believe by working with the authorities and the zoos themselves, we can provide more long-term improvements that will benefit all animals held in captivity in zoos and aquariums across Indonesia.

PKBSI recently confirmed to us that they have in fact been advising Bandung Zoo management since March 2016. In light of the recent publicity at the zoo, the Indonesian Minister of Environment and Forestry has asked PKBSI to help further. We are informed that PKBSI has mobilised a team of vets and animal care personnel from within their membership to assist Bandung Zoo.

Following on from this our own Wild Welfare team is arranging to return to the facility in the coming weeks, and alongside the relevant authorities and PKBSI, will be discussing the situation further and identifying needs and requirements.