Can a zoo visitor-animal interaction ever be good for animal welfare? 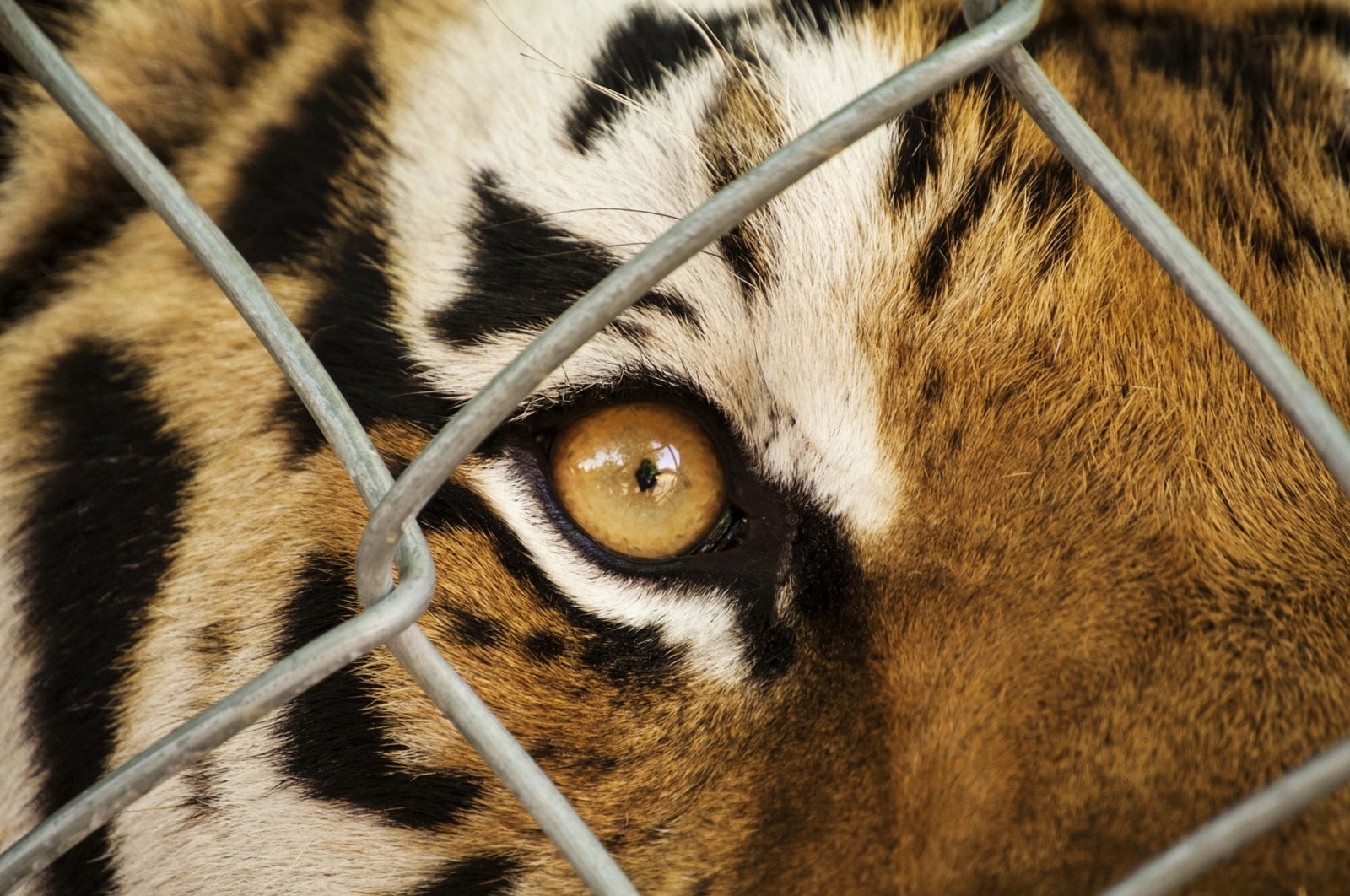 The other day I was talking about interactions between visitors and animals in zoos and aquariums.  Many sub-standard (and some modern zoos) hold controversial activities that allow for close interactions with wild animals.  Petting and photo opportunities, animal shows and animal rides are amongst just some of the opportunities on offer, and any of them are likely to have a negative impact on an animal’s welfare. One colleague asked whether my perception of interactions included walk-through enclosures, such as the very popular lemur or bat enclosures found at a number of zoos. This is a good point as this is of course an interaction of some form. It’s in a contained environment that is shared by both the visitor and animal and where an animal may not have the ability to remove itself from this environment, it often results in close and sometimes direct contact.  But does this close proximity necessarily translate into a negative welfare state for the animals?  Or can we learn from these types of interactions to positively make a change to other more obviously detrimental interactions?

To find out more, I asked my colleague Dr Jake Veasey, who has significant experience in master-planning and zoo development, having designed a number of award winning facilities. Jake focuses on the important aspect of ensuring an animal’s behavioural needs are incorporated into any zoo design, and believes that both animal welfare and the visitor experience can be redefined by an innovative approach to zoo enterprises.

Jake, do you think walk through enclosures provide a positive environment for animals?

I think the fact that an enclosure is a walk-through does not by definition necessarily benefit the animals, but it does create opportunities that if they are taken can result in huge improvements in terms of animal welfare. Firstly and most importantly walk-throughs require more space to accommodate both animals and the visitors. In a walk-through, this increase in space allows habitats to be deeper and more complex, benefiting residents without compromising viewing by visitors as it would in habitats visitors merely looked into from the outside. I’ve always strived to design habitats which allow animals to express their behavioural needs; so for one of the most popular walk-through species; lemurs I have only ever designed habitats around several large trees in which lemurs can climb, browse, seek social isolation and behave very much as wild lemurs. These opportunities would be more or less impossible in conventional enclosures visitors look into through fences.

When I designed my first lemur walkthrough in the early 2000’s there was barely a lemur with access to trees in zoos, and I’m pleased to say that since that facility received the recognition it did for what was a surprisingly innovative design at that time, barely a single facility for lemurs has been designed that isn’t a walkthrough and the net result of that is that by and large lemurs in zoos now have access to much bigger and more complex spaces than they did at the turn of the millennium and this has benefited zoos, visitors and animals alike.

Do you think visitors learn more about the animal if they are in a walk-through enclosure?

When I completed my first lemur walk-through I set out to review how the experience impacted visitors by means of a questionnaire and the results were fascinating. I compared the insights of visitors who had direct access to interpretive material but could only see lemurs through a fence as was the convention at that time with those who went into the walk-through and a selection of people who had experienced neither. Despite having direct access to interpretative material, people who had spent time in the walk-through somehow seemed to retain more information pertaining to lemurs, their habitat and threats than those who observed them and the signage from the outside. But that wasn’t the revelation for me; I also asked the three groups to use a single word to describe the image of a black and white ruffed lemur. Then, with the several hundred words used across all three groups, I asked a panel to score those words from one to five with five being positive, one negative and three neutral.

What I discovered was that people who had shared the space with the lemurs in the walk-through used significantly more positive words to describe the lemur than those who hadn’t been in, or those who’d seen them only through the fence.

For me this was a profound revelation; there was something about bringing people in the space with the animal, and I think crucially in an environment in which the animal was in control of its actions, free to perform species typical behaviours in complex naturalistic spaces that generated an empathy that other methods of seeing them didn’t. Its sometimes quite easy for the public to pity zoo animals when they are looked at through bars and fences but in a well designed immersive habitat the visitor doesn’t feel confined and yet evidently the animals have more freedom in that space than the public and I think that is a very powerful message to convey.

Can they go wrong and why?

When putting public and animals in the same space; there is always a risk, but we have to manage that risk. Its crucial to pick the right species; it goes without saying that not every species will work in a walk-through but I also think we have to be very careful about pushing the limits of what might be possible to the extent that animals can’t truly be themselves in walk-throughs. Deer for example might be suitable for large walk-throughs for much of the year, but when in rut, stags in even the largest of walk-throughs could be problematic. This can be overcome by temporarily closing the experience but I would have concerns about alternative methods of reducing risk such as confining stags in smaller spaces adjacent to females at times when they are profoundly motivated to seek them out.

My philosophy wherever possible in zoo design is to flip the convention of the traditional zoo where public surround animals on its head and have animals surrounding the public and walk-throughs achieve this admirably but crucial to achieving that is providing spaces within the walk-throughs where animals can get away from the public and indeed each other. These spaces are also important in providing animals with choices, a crucial component to good welfare. And so, these social spaces which reduce the risk of conflict with the public and with conspecifics are therefore yet another example of where in a walk-through space, the needs of the animal and the visitor coincide in a way they don’t in conventional ‘exhibits’.

I also think providing animals with choices and freedoms; which are contingent upon environmental complexity and scale, provide opportunities to convey to visitors that they are now in an animal’s space and they should respect that space and the animals within and behave appropriately; something they will hopefully take away with them in the way the interact with wildlife more generally.

Finally, irrespective of the design of a walk-through, management is crucial and all walk-throughs should be supervised; the benefits of this are several; supervision helps avoid things going wrong, provides opportunities for informed staff to engage with visitors about wildlife and wild animals and allows for unprecedented opportunities for observation of animals by animal care staff.

How do encounters in a walk-through compare to the more structured interactions in zoos such as animal performances?

I’ve always been deeply sceptical of structured animal encounters and animal ‘demonstrations’, since rather than present animals as ambassadors as they invariably claim to do, they present animals, at our convenience, to perform for us. Irrespective of the potential welfare compromises involved in training and managing animals for performances, this method of ‘presenting’ wild animals reinforces humanities dominion over wildlife which is ultimately the root of all conservation challenges wildlife faces and so I am concerned about the unintended educational output of these experiences.

Conversely an animal in a walkt-hrough that of its own volition decides to jump from one tree to another, feed on naturally occurring leaves within their habitat, grooms a conspecific sleep or even solicits grooming from the public unprompted as some ruffed lemurs do, I believe conveys far more valuable lessons for us about these animals, what they do and how they think than any structured talk can.

How could other enclosures for animals be adapted so they achieve the same welfare and visitor benefits as a good walk through?

Its clear to me that species such as lemurs have benefited significantly from the transition to walk-through spaces because of the dramatic increase in space and environmental complexity they have access to, so where species cannot safely be accommodated in walk-through spaces, I believe we are duty bound to consider how to deliver similar improvements and address the challenges these space create for public viewing in different ways. It is here that skilful zoo design should attempt to satisfy both animal based and visitor goals. And so for example, where animals will benefit from deeper more vegetated habitats, viewing promontories can be extended into enclosures to allow visitors opportunities to penetrate deeper into the animal’s space without taking away from that space. In fact well designed promontories can function as barriers providing social spaces for animals or features animals might utilise for shelter. Again, I genuinely believe there is rarely a conflict between designing for animal welfare and visitor needs, just a very different approach than that which is more conventionally employed.

Zoos often come under criticism about how they keep their animals. Do zoos need to evolve and change the way visitors interact with the animals to encourage more engagement and better animal welfare – if so how?

My personal mantra with regards to zoos is that the mandate for zoos is conservation (including education about the natural world and its importance) but their license to operate has to be animal welfare.

Architects know how to design for people, after all architects and the public they design for share a common language, so zoo architects can skilfully design to allow for visitor flow, appropriate distribution of toilets, eating areas, shelter from the elements and even to accommodate public expectations of what an animal’s habitat should look like, but architects don’t speak ‘animal’ and so, historically, architects rarely design effectively for the needs of wild animals. Just as I feel we need to flip the concept of public surrounding animals on its head, I think we need to flip our design process on its head, we need to design for animals first, identifying those behaviours which are crucial to their welfare and design environments that effectively provision for these needs, and only once that process is complete, should we work out how to accommodate the visitor’s requirements. There isn’t necessarily a conflict between the two, but the animals should be put first in the process, they after all inhabit the space permanently rather than being transient visitors and it is after all so much easier to design the visitor experience around the animal’s environment than to satisfactorily design animal welfare friendly spaces around visitor needs.

Welfare is arguably the single greatest challenge zoos face and only evidence-based design and management can resolve that. If zoos resolve these challenges, as I believe is possible for the vast majority of species, the visitor experience will also be enhanced significantly. People who visit zoos already have an empathy for wildlife, and they are increasingly aware of animal welfare related issues and so if zoos can effectively address the welfare challenges of maintaining wild animals in captivity and the concerns of visitors about those challenges, we can make zoos better places for animals and visitors alike.