Improvements for Elephants and more in Sabah 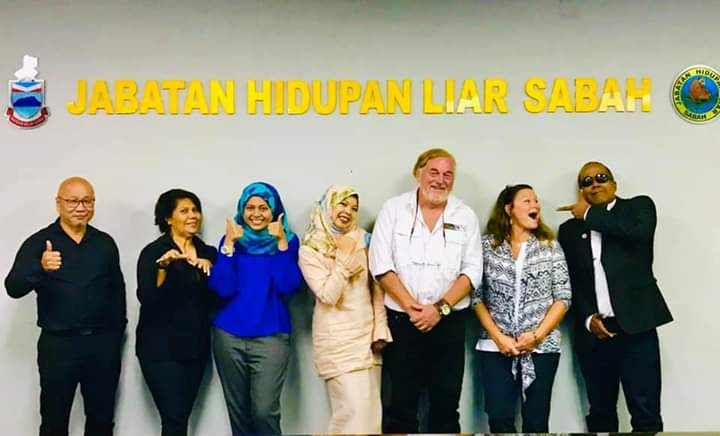 Our team returned to the steamy heat of Sabah recently to reignite our relationship with Lok Kawi Wildlife Park in Kota Kinabalu.

Last year we conducted a welfare audit on the park and we were pleased to be able to return and look over some of the improvements there and, at the same time, train the keepers in how to improve their standards of welfare.

Wild Welfare’s field director, Dave Morgan said, “The staff at Lok Kawi Wildlife Park were fantastic, and threw themselves into the enrichment sessions with great enthusiasm, developing and implementing ideas of their own.”

“It was very encouraging to see some significant improvement around the park since last year’s audit, particularly given that half the elephant population there are now no longer chained and have some space to move around in.”

Dave was joined by Margaret Whittaker from Creative Animal Behaviour Solutions and together they led the activities. We were hugely grateful to the Tennessee Elephant Sanctuary for sponsoring her to join us.

Margaret was also impressed with the enthusiasm of the staff, commenting: “They embraced all the new concepts we presented. They were a bit sceptical of these ‘strange’ techniques, and suspicious of us at first, but then they absolutely jumped in with both feet and wanted to do everything!”

Elephants featured heavily in the team’s plans as we wanted to introduce Lok Kawi staff to the idea of working with elephants in a protected contact setting. Protected contact is a system for managing elephants that uses positive reinforcement training as the primary method to modify behaviour.

Voluntary cooperation of the animal is gained through the use of rewards and positioning is directed by targets. Trainers function outside of the elephant social hierarchy. It’s not just a learning curve for the keepers, the elephants had lots to learn too.

Over the course of seven days we hosted several training sessions with the keepers and their elephants. As well as this we also got the keepers thinking about enrichment ideas such as puzzle feeders for sun bears and platforms for clouded leopards. The keepers were so excited by this that they took over and carried on making more designs for an even wider variety of species!

Our team also taught several lectures into improvements in animal welfare, discussing what it is and why it’s so important and the theory behind enrichment and training. These were all gratefully received by the keepers.

The manager of Lok Kawi Wildlife Park, Ms Nur’Ain Acheh seemed glad of our help, she said: “It was a good decision to invite Wild Welfare to visit. The recommendations from them were useful to better manage the animals and improve for the future.”

Having built this positive relationship between Wild Welfare and the staff of Lok Kawi Wildlife Park, we are hopeful that even more positive changes can be made in the future with plans to return as soon as we can.

Image © Wild Welfare: Dave Morgan and the team in Sabah.