Bears continue to suffer miserable lives on a daily basis 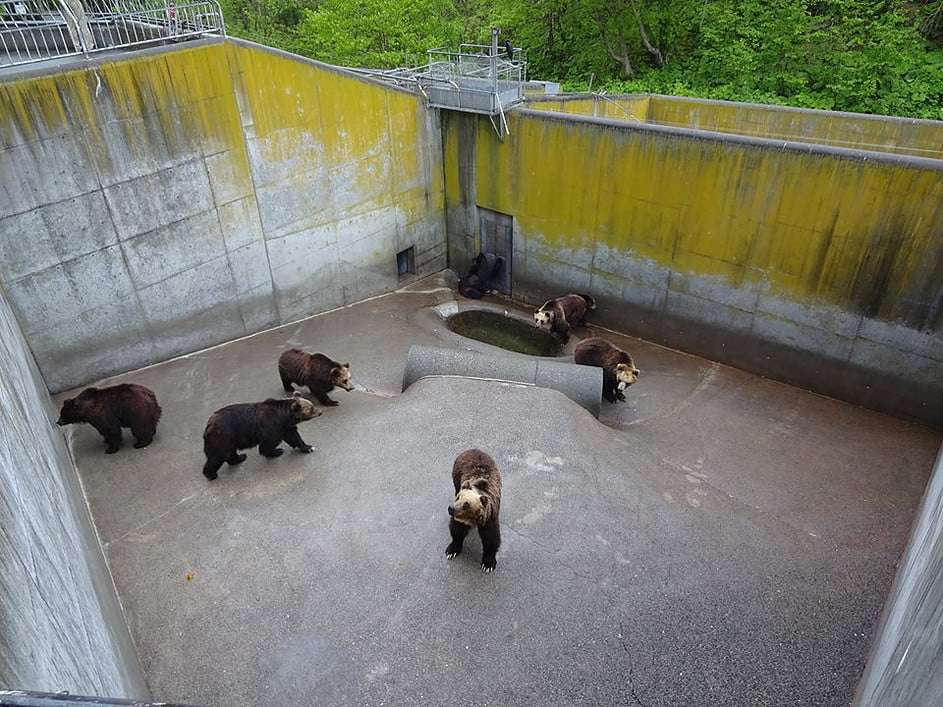 Distressing captive conditions resulting in poor health and welfare continue for hundreds of bears held in bear parks in Japan.

Historically, these parks began as centres to care for orphaned (as a result of hunting and encroachment) cubs, but the centres found the young bears to be popular with the public — with the result that breeding the animals was encouraged over a number of generations, providing a regular supply of cubs for what was also a profitable enterprise. However, this program rapidly got out of control in the sense that bears, being long-lived and relatively robust animals will survive these poor quality environments to the point where several of the parks are keeping literally hundreds of bears in rows of simple, stark, concrete pits. Today a number of these bear parks continue to exist across the country, mostly as tourism-oriented leisure facilities.

In 2005 an investigation was carried out at three of the parks by international investigators from the World Society for the Protection of Animals and the World Association of Zoos and Aquariums. The findings from this report indicated extremely serious welfare issues. Overcrowding and poor vet and keeper care, resulted in obvious health concerns such as lacerations, limping, torn ears, skin conditions and chronic conjunctivitis. There was little or no behavioural enrichment, resulting in lethargic or stereotypical behaviour, and begging when the public threw food. Breeding of the bears occurred, with the parks admitting that this encouraged visitors and circus acts with bears dressed up and riding bikes was evident.

The parks visited were given a summary of key concerns and recommendations but a follow up visit in 2007 confirmed that few of these recommendations had been considered. Now, a recent investigation conducted by Wild Welfare in June of this year, continues to show disturbing and distressing conditions for hundreds of bears.

The investigation showed that the main concerns continued within a number of these parks. Overcrowding, inappropriate visitor entertainment and a lack of veterinary care, all contributed towards already barren and limiting enclosures. The end result is that many hundreds of bears continue to suffer miserable lives on a daily basis.

Many of the ongoing problems stem from continued breeding. Breeding is encouraged as cubs provide entertainment for tourists, but the sheer number of bears held in these parks significantly contributes to their poor health and welfare. Crammed into tiny cages that are unfit for one or two bears, let alone twenty, it encourages aggression and consequently injuries and diseases are common. Bears are also naturally solitary animals, and the forced containment with a number of other animals can cause significant stress to an individual, often resulting in them showing depressed behaviours and trying to seek out solitude where there is none.

Public feeding of the bears is extremely popular. By default, most of the bears are lethargic and depressed, meaning they move little and from a visitors perspective are far from entertaining. Throwing food in for the bears offers an interactive opportunity and ensures the bears react, often by begging for the food or fighting with their neighbour, both of which delight the visitors. It also offers an easy way to make more money for the park. Although circus-like shows had been reduced, investigators still had to endure a performance of bears on balls and slides and catching hoops over their necks, all to the applause from an entertained audience.

Lack of veterinary care and attention was evident, sadly in one park alone, up to 80 per cent of the black bears had a debilitating skin condition, resulting in a vast majority having itched away their fur, leaving many enclosures holding balding, itching and miserable animals.

Is there light at the end of the tunnel? It was not all doom and gloom, one of the parks visited, Bear Mountain, was created following advice from the previous investigations. This park offers natural, large enclosures with plenty of vegetation and pools and shelter for the bears to use and hide in. Staff were friendly and helpful and the environment had been created to respect the animals within it. Another park, Ani in Kitaakita, had recently created a brown bear enclosure – still muddy from being so new, there was at least mud for the bears to walk on. It hosted two deep pools, a shelter and climbing frames and although lacking in natural vegetation, one can hope within time that this will be included. No public feeding was allowed, allowing the bears to express their natural behaviours, which they did by taking long dips in the pools and foraging. Unfortunately, with 17 brown bears at the park only a few can go into the enclosure at a time, so some still remained shut indoors for hours on end. However, the fact that this facility had been created is progress and shows that change can happen.

Sadly though, for now, many hundreds of bears are still suffering in deplorable conditions. Changing attitudes and actions is extremely difficult, so how can this investigation actually help the bears? An investigation like this can provide up to date information on the extremely concerning welfare issues affecting bears in Japanese bear parks. It can be used to approach the Environment Ministry about enacting legislation and standards that protect welfare for all captive wild animals in Japan. It can also connect an ever-growing team of animal welfare NGOs in Japan and help develop the capacity to work on captive wild animal initiatives. Investigators can also approach individual bear parks, requesting immediate improvements for the bears, using evidence from the investigation, and working with individual management staff.

By working directly with the parks, setting standards and legislation and growing capacity for Japanese support to end these distressing parks, we can collectively encourage a positive long-term solution for Japan’s captive bears.