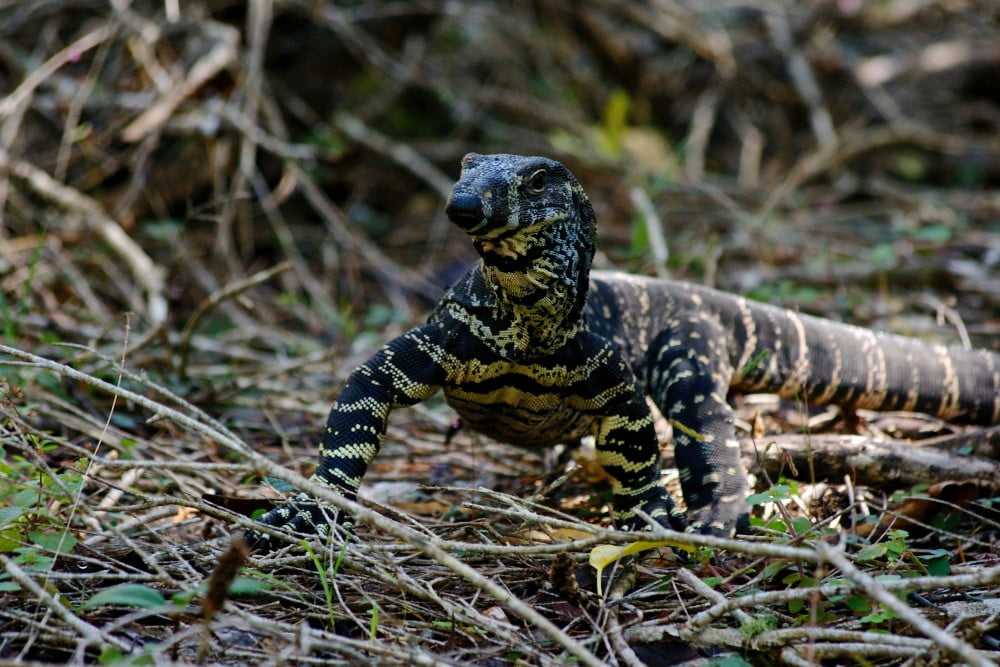 Reptiles can all too often be the forgotten animals when it comes to welfare in captivity, with the majority of studies still focusing on mammals and birds. On Reptile Awareness Day, our field director Dave Morgan, gives us his thoughts on reptile welfare in captivity.

A recurring problem in zoo enclosure design is the tendency to rely on traditional approaches to what we think that the animals need and want in an enclosure. Nowhere is this issue more apparent than in the design of reptile enclosures in reptile houses around the world; invariably a series of small, brightly-lit, heated, ‘jewel-case’ glass fronted boxes, frequently devoid of any refuge with the inmate being forced to be starkly obvious in a plastic or painted representation of its natural habitat. That some reptiles will feed, maintain good physiological health and quite often breed, under these conditions is regarded by their keepers as being indicators of successful husbandry. However, neither of these are indicators of good welfare. These animals can certainly exist under these conditions; but I ask myself, do they thrive?

Reptiles are ectotherms, which means that their body temperatures and metabolic processes are entirely reliant on external temperatures. Our planetary temperatures are of course driven entirely by the sun, which as a consequence, means that these animals are incredibly sensitive to light and temperature. Indeed they have evolved a whole gamut of sensory apparatus than concern themselves solely with light and temperature and as such, we can only speculate how reptiles experience them. For example, a number of lizard species can ‘see’ ultra-violet light; at the other end of the spectrum, certain snakes have heat-sensing organs in their heads that allows them to detect infra-red heat.

Some lizards and all snakes have a very sophisticated organ in their tongues and roof of their mouths, for what we – as being mere mammals – can only conceptualise as being a sense of ‘smell’. Yet it is likely that these sensory systems are considerably more elaborate than deriving “smell”  and involve olfactory particle heat that allows the animal to build what is likely to be an astonishingly corporeal picture of the environs surrounding it. Although “deaf” as we understand to be the opposite of ‘hearing’ (they have no external ear openings and cannot ‘hear’ airborne sound), the fact that snakes being legless have at least one third of the body in contact with a surface at any given point in time, means that they are highly receptive to infra-sound – sound carried at very low wavelengths.

These are senses that we have absolutely no means of comprehending and these animal’s perceptions of reality and their experience of the world around them, are considerably different to our own.

In the wild state they live in highly complex environments of dynamic spectra and lux of light, temperature and wavelength, on a daily and seasonal basis; changeable patterns  of micro-climates and humidity; seasonally-diverse diets as differing prey items become available at different times of the year; in short, textural environments of intricate convolution and complexity. Such complexity affords the animal the luxury of choice. Unfortunately, they too are a complexity that are very rarely catered for in the standard zoo jewel cases.

I wish that zoos would make more of an effort to at least use more natural sunlight in their delivery of care for their reptiles – with all its daily and seasonal peculiarity – and in fairness, some do. The science of reptile husbandry has considerably developed in the last two decades and through the use of artificial lighting systems, interior climatic control and thermal provision, a great number of  species are being regularly bred in captivity on a multi-generational basis. However, as I mentioned at the start, reproduction is not necessarily a good welfare/quality of life metric. The conditions under which these animals are being kept remains in my opinion, environmentally-minimalistic with very few opportunities for choice or self-selection.

I recently came across in Brazil, what I regard as being the best python enclosure I have ever seen. It was a large outdoor ‘pit’ of some 150 square metres, with a deep water moat around the perimeter and natural forest vegetation of mature trees and shrubs, and a small swamp in the interior. The enclosure was of course, open to the elements and the prevailing sub-tropical climate. There were seven adult Burmese Pythons in this enclosure and despite the density of the vegetation, all were visible, performing natural behaviours such as basking, swimming, active hunting and mating. Whilst one can certainly stimulate these behaviours in the artificial enclosures, what I liked about this ‘python pit’ was the diversity and environmental complexity that this naturalistic approach allowed for. Environmental diversity that is difficult (and expensive) to replicate in indoor terraria. In this fairly faithful replica of their natural habitat in tropical Southeast Asia, I feel certain that the snakes have a very good quality of life: indeed it was conceivable that they are not even aware of being in a cage in the first place!

And is that not what we want for all animals under our care?

Take a look at our Reticulated Python Care For Us manual.

Take a look at our Water Monitor Care For Us manual.

Take a look at our African Spurred Tortoise Care For Us manual.