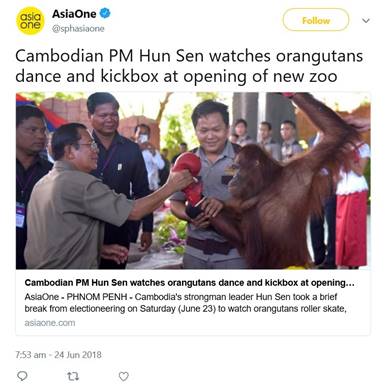 Wild Welfare has been made aware of performances taking place at a zoo in Cambodia, where orangutans are being made to dance, ride bicycles and fight each other wearing boxing gloves.

Wild Welfare strongly condemns the exploitation of captive wild animals like this and considers zoo performances that are harmful to an animal’s physical or psychological well-being as completely unacceptable.

Wild Welfare’s Projects Director Georgina Groves, said: “This event in Cambodia demonstrates animal cruelty and a zoo’s responsibility should be to animal welfare. There is nothing natural about what these orangutans are being asked to do and it is quite clear that human entertainment has been given priority over animal welfare, with intelligent individuals being made to perform what can only be described as circus tricks and stunts to amuse visitors.”

A news story on AsiaOne shows the animal performance taking place at Phnom Penh Safari, a zoo in Cambodia’s capital city. The zoo was opened by the country’s prime minister on June 23rd, who while visiting reportedly watched a show where orangutans were boxing each other and dancing. Accompanying images also show the animals dressed up in clothes riding bicycles and hula hooping.

Georgina Groves added: “Any shows carried out in a zoo or aquarium should focus on educating visitors about an animal’s natural biology and behaviour and their conservation needs. Full consideration and priority needs to be given to animal welfare at all times, otherwise the performance should simply not exist.

“By training animals to “act” violently towards each other, whether slapstick or not, it will likely have negative repercussions  on the animal’s ability to socialise normally, meaning long-term health and welfare for these individuals is compromised. In addition, there are the unintended injuries the animals may also inflict on themselves and each other during the performance.”

Wild Welfare considers animal shows and visitor-animal interactions that are detrimental to an animal’s physical or mental welfare, a non-negotiable management practice. If while carrying out a welfare assessment at a zoo facility the charity learns that such events are taking place, they will urge the zoo to cease them immediately.

Wild Welfare urges Phnom Penh Safari to stop using orangutans and any of its other animals, in performances such as the ones recently reported in the news. This recent incident highlights the work still to be done around the world to challenge poor welfare practices in zoos and aquariums. Wild Welfare is asking people to do thorough research before visiting a zoo facility and ensuring they do not support anywhere displaying poor animal welfare practices. More information can be found here.