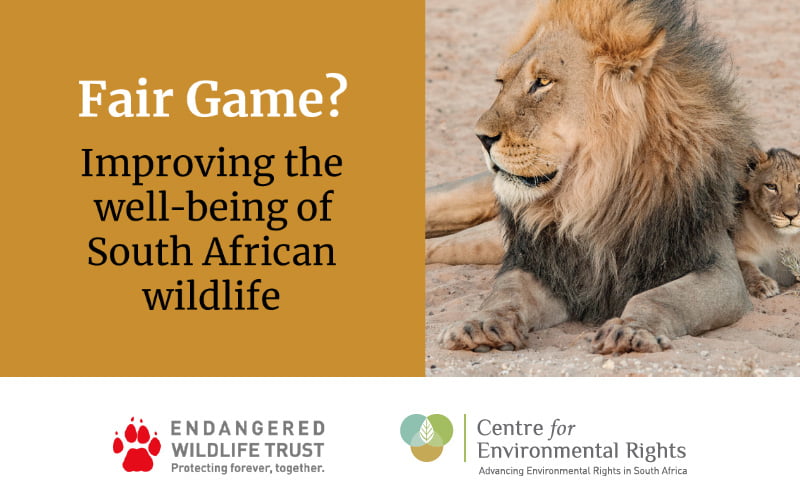 The Centre for Environmental Rights (CER) and the Endangered Wildlife Trust (EWT) has published its report Fair Game? Improving the Regulation of the Well-being of South African Wildlife. The report is based on a review of the regulations of wild animal welfare in South Africa and Wild Welfare was one of the organisations who contributed to the review.

The report found that huge gaps in South Africa’s animal welfare legislation and conservation legislation are resulting in a failure to adequately protect the country’s wild animals, meaning many species are suffering. The report concluded that existing laws are often unsuited to addressing welfare issues specifically relevant to wildlife.

Wild Welfare’s field director, Dave Morgan, who has extensive experience of working with captive wild animals across Africa and the world, said: “We were very pleased to be asked to contribute to this review. We highlighted the most up-to-date methods there are available to properly assess animal welfare and if we can see these methods used to make positive changes for wild animals in captivity, we’ll be very happy.”

Wild Welfare’s input to the review was the recommendation that Mellor’s Five Domains Model of Animal Welfare be the welfare model used when looking at forming new or reviewing existing legislation. The report referred to Webster’s Five Freedoms model for animal welfare, which was originally proposed for agricultural livestock and is not reflective of current understanding of an animal’s comprehensive welfare needs.

While Webster’s ‘five freedoms’ places emphasis on assessing the prevention of an animal’s negative welfare states – preventing hunger, thirst, pain etc – Mellor’s ‘five domains’ model incorporates the physical domains of nutrition, environment, health and behaviour, and also assesses the mental or affective state of an animal. This psychological well-being represents an animal’s overall feelings and experiences and is a crucial element in that individual’s welfare.

Wild Welfare uses the Five Domains model in its work with zoos and aquariums and following extensive involvement with the World Association of Zoos and Aquariums (WAZA) on its Welfare Strategy, the Model was incorporated into the document. As an organisation, we’re working closely on the development of animal welfare legislation in Brazil, Japan and Vietnam, ensuring the most up-to-date science and understanding on animal welfare is incorporated into laws as they’re laid down.

Dave Morgan added: “We’re working internationally on developing welfare legislation for captive wild animals and we’d be delighted to share our knowledge and experience in any way we can. What this report has shown is that there’s a clear need for much better basic animal welfare legislation in South Africa. If we start with this, then we can specialise and ensure non-domesticated animals and wildlife is properly protected as well.”

The report has highlighted the urgent need for reform, a process the EWT and the CER have already begun and Wild Welfare will be following keenly to see how things develop.