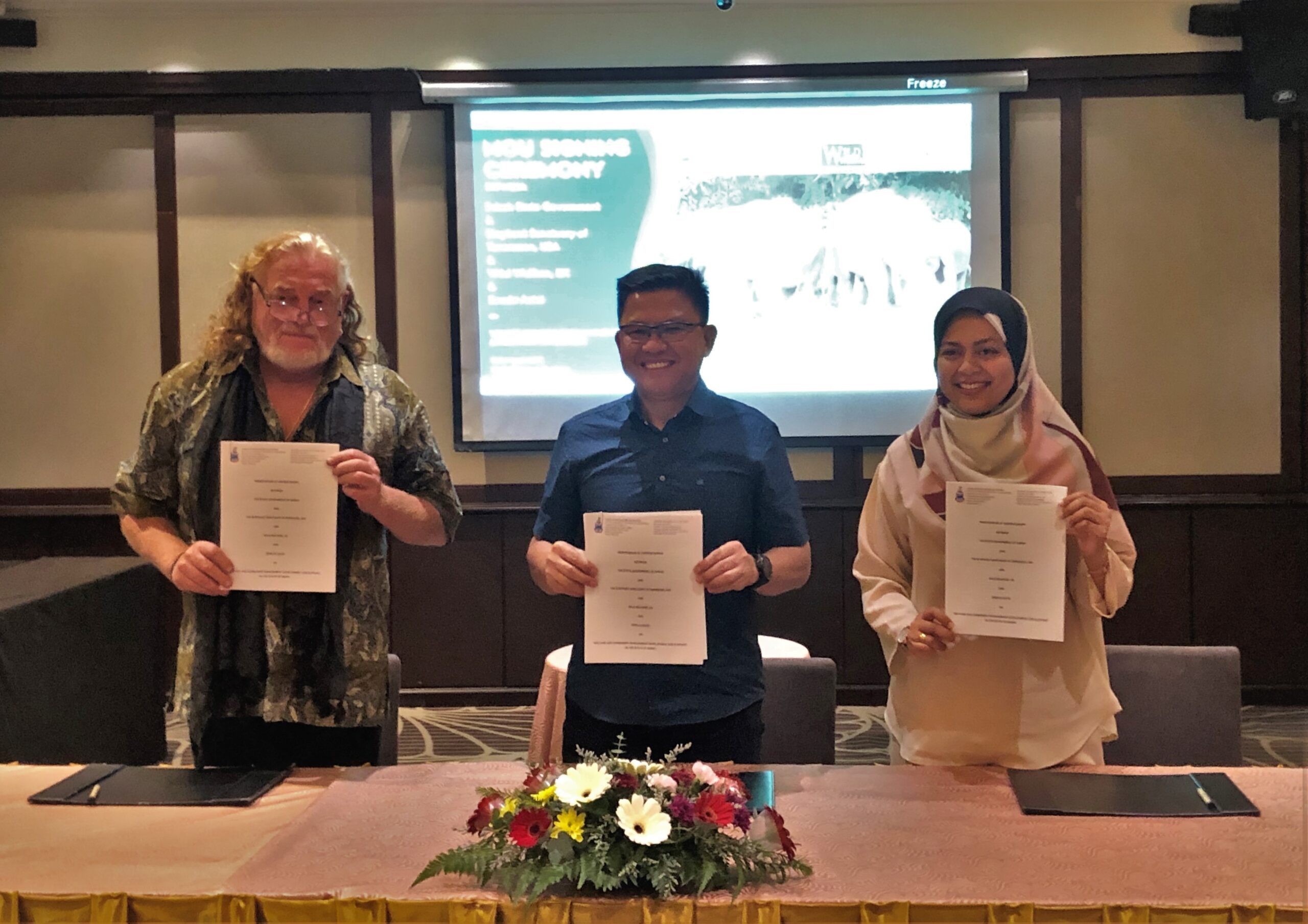 After two years, the Wild Welfare team were finally able to return to in-person, hands-on international projects again, with a visit to Sabah to focus on elephant welfare. During the visit, a Memorandum of Understanding (MoU) was signed by four organisations to solidify a collective commitment to drive forward positive changes for elephants under human care within Sabah.

Due to human/wildlife conflict, elephants across Sabah often come into human care as calves and are unable to be returned to the wild. Captive facilities are required to provide life-long care for the orphaned elephants.

The formalised agreement was made between the Sabah Wildlife Department, Wild Welfare, The Elephant Sanctuary in Tennessee and Seratu Aatai.

The Sabah visit was initially planned for 2020 but had to be postponed several times due to the global pandemic. Wild Welfare’s Field Director Dave Morgan, and Margaret Whittaker from Creative Animal Behaviour Solutions eventually braved the intricate bureaucracy of international COVID regulations and journeyed to Sabah in March 2022.

Wild Welfare and the Sabah Wildlife Department have a historical partnership, having collaborated on projects including welfare audits and training workshops for animal care staff in the past, with a particular focus on elephants.

Seratu Aatai is an organisation dedicated to shaping the future of Sabah’s elephants, including the reduction of human/elephant conflict and the improvement of elephant welfare for individuals under human care.

The Elephant Sanctuary in Tennessee have been supporters of Wild Welfare’s mission for several years, providing financial and technical advice to the charity.

To formally initiate the joint project, the MoU signing was held at a ceremonial event in Kota Kinabalu with the 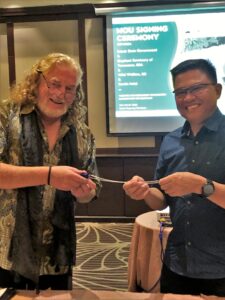 Permanent Secretary of the Ministry of Tourism, Culture and Environment, Datuk Ir. Haji Mohammad Yusrie Abdullah and Dr. Nurzhafarina Othman, Founder & Director of Seratu Aatai. Amongst the signing activities, the Secretary was presented with a training clicker from the Elephant Sanctuary in Tennessee to signify the commitment to positive reinforcement training with the elephants using the clickers moving forward. The Chief Executive Officer for the Elephant Sanctuary in Tennessee, Mdm Janice Zeitlin sent her apologies as she was unfortunately unable to attend the event, and had signed the MoU in advance.

“The signing of this MoU represents the ratification of the very close working relationship the four organisations have had with each other over the past few years”, said Dave Morgan, Wild Welfare’s Field Director. “We are now united in a common goal to provide the best in care for both wild and captive elephants in Sabah.”

The objectives of the MoU have a broad reach but focus primarily upon the health and welfare of both wild and captive elephants in Sabah. For the captive elephants, the signatories have agreed to promote and develop international standards of care, husbandry and welfare for the elephants held at the Sabah Wildlife Department-operated Lok Kawi Wildlife Park in Kota Kinabalu. Wild Welfare and the Elephant Sanctuary in Tennessee have pledged to provide technical advice, training and practical assistance such that the Sabah Wildlife Department may develop self-sustaining programmes for elephant care.

“While developing new ways to mitigate human/elephant conflict, it’s important to also consider the welfare of wild elephants. We are very pleased that we can now combine our experience with Wild Welfare and the Elephant Sanctuary in Tennessee and find the best way to reduce conflict but at the same time respect elephant needs, behaviour and ecology”  Dr Nuz’farina Othman, Founder and Director of Seratu Aatai

For the wild elephants, the signatories will focus upon developing and implementing strategies to reduce and mitigate incidences of human/elephant conflict in the Lower Kinabatagan region of Sabah.  Additionally, resources will be provided to local communities through Seratu Aatai in the form of elephant awareness education and training.

Wild Welfare currently works in over 10 different countries, driving forward animal welfare improvements for captive animals in zoos, aquariums, and sanctuaries. The charity is currently celebrating its 10 year anniversary, and initially began working in Sabah in 2016.