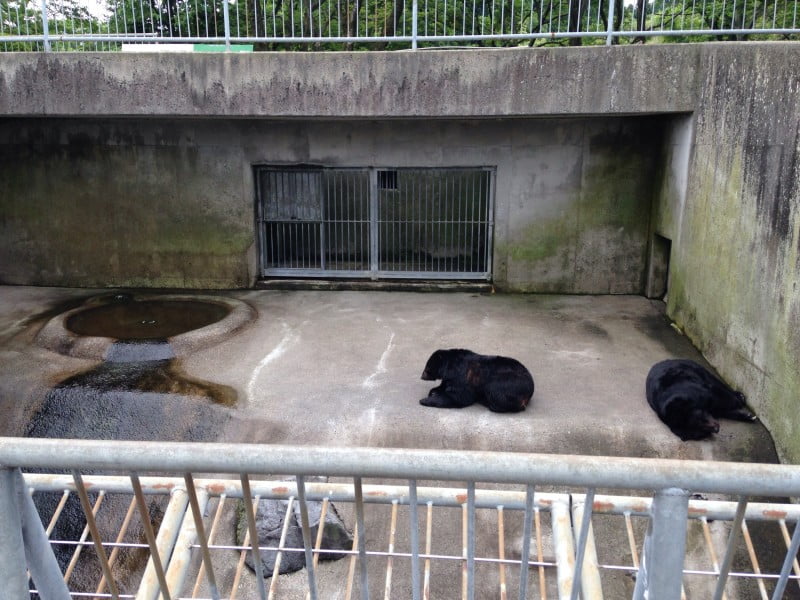 Hundreds of bears are being kept in over-crowded, barren, concrete enclosures for public entertainment. In one park, a lack of veterinary care means some bears are almost unrecognisable, losing up to 80 per cent of their hair, resulting in the husk of an animal that was once a magnificent black bear.

The Japanese bear parks began as centres to care for orphaned (as a result of hunting and encroachment) wild Asiatic black and brown bears from around Japan. However, this program rapidly got out of control as bears, being long-lived and relatively robust animals, will survive these poor quality environments to the point where several of the parks are keeping literally hundreds of bears in rows of simple, stark, concrete pits.

In 2005 an investigation was carried out at three of the parks by international investigators. The findings from this report indicated extremely serious welfare issues. Now, a 2015 investigation carried out by Wild Welfare1, continues to show disturbing and distressing conditions for hundreds of bears.

Many of the ongoing problems stem from over-breeding. Breeding is encouraged as cubs provide entertainment for tourists, but the sheer number of bears held in these parks significantly contributes to their poor health and welfare. Bears are crammed into tiny cages that are unfit for one or two individuals, let alone twenty. Bears are also naturally solitary animals, and the forced containment with a number of other animals can cause significant stress to an individual, often resulting in them showing depressed behaviours and trying to seek out solitude where there is none.

Public feeding of the bears is extremely popular. Throwing food in offers an interactive opportunity and ensures the bears react, often by begging for the food or fighting with their neighbour, both of which delight the visitors. Lack of veterinary care and attention was evident, sadly in one park alone, up to 80 per cent of the black bears had a debilitating skin condition, resulting in the vast majority having scratched away their fur, leaving many enclosures holding balding, itching and miserable animals.

Is there light at the end of the tunnel? It was not all doom and gloom; one of the parks visited was new, created following advice from the previous investigations. This park offered natural, large enclosures with plenty of vegetation, pools, and shelter for the bears to use and hide in. Another park had recently built a new brown bear enclosure where the bears were offered soft substrate to dig in, dens and deep pools. They are also committed to further improvements, even if currently they are not really clear what those need to be.

Georgina Allen, Wild Welfare’s director of projects and one of the investigators, said: “Animal welfare science has come on a long way in the past few decades and we now know that animals have complex needs just like us, that need to be satisfied for them to have good welfare.

“It’s simply not enough to provide them with the basics such as food, water or vegetation. Their mental needs also need to be addressed for them to truly have a positive experience in captivity.”

Sadly though, for now, many hundreds of bears are still suffering in deplorable conditions. “Bears are fairly robust animals and can survive in poor environments, meaning they continue to suffer immensely poor welfare within these parks.

“It was distressing to see so many bears survive in such miserable environments, while the public seemed unaware of their suffering.”

While Japan’s ever growing animal welfare movement seeks to improve the welfare for domestic pets, protection for captive wild animals is a long way off. The current Act on Welfare and Management (1973, amendments 2012/13) does not specifically address the welfare for captive wild animals and structural and social cultural barriers to improve this legislation.

Mrs Allen hopes this investigation can support actions seeking to improve the welfare for captive wild animals and said: “We are connecting with the Japan animal welfare NGO’s and the Japanese Zoo Association, to help improve legislation and standards that will provide better protection and care for these bears, and other captive wild animals within Japan.”

In the meantime, the Wild Welfare team will be using the evidence from this investigation to introduce improvements within the parks, with support from experts within the wider, international zoo community.