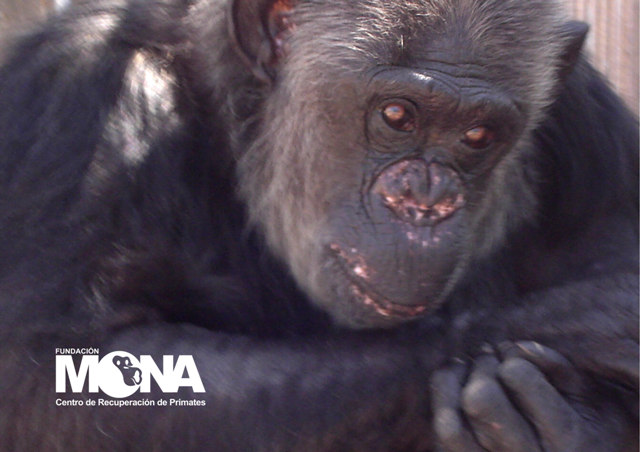 UK animal welfare charity, Wild Welfare, is supporting the rehoming of an elderly pet chimpanzee to a wildlife centre in Spain.

Wild Welfare is supporting the safe move of Suzie, a forty-year-old chimpanzee who is currently living alone in a private home in Alicante, to The MONA Foundation, a specialist rehabilitation centre.

MONA is rehoming Suzie from her current home where she has been living on her own for many years and integrating her into their elderly chimp group, where she can live out her remaining years under their expert care.

Wild Welfare’s acting UK director, Simon Marsh, said: “We are so pleased we could help MONA secure Suzie’s safe move to their rehabilitation centre, where she is going to be able to socialise with other chimpanzees for the first time in many, many years.

“As one of our closest living relatives it’s no surprise that chimps are highly social animals and thrive on being in the company of others. Living in solitude was no life for Suzie, but thanks to MONA she will now be able to live out her days with company, in a natural, spacious environment, where her health and wellbeing can be given top priority.

The MONA Foundation first heard about Suzie more than a decade ago, with negotiations continuing with her current owners until they could convince them that the best place for her is to live with other chimpanzees at the sanctuary.

MONAs director, Olga Feliu, said: “We are so happy to be finally relocating Suzie to her new home at the MONA Sanctuary and we can’t thank Wild Welfare enough for their generosity in helping with the costs of her relocation.”

Wild Welfare’s work focuses on improving animal care and welfare practices in captive wildlife facilities and it is concerned with ensuring good welfare for every individual animal.

When the MONA Foundation reached out to Wild Welfare for help, sharing Suzie’s plight, the charity was very keen to do whatever it could to help secure her move in order to significantly improve her welfare.

In 2018, Wild Welfare rehomed four Ussuri brown bears from unsuitable conditions in Japan to a specially built new home in Yorkshire, England, and the charity is currently running a public fundraiser to secure the repatriation of an endangered macaque rescued from the illegal wildlife trade in Malaysia.

The MONA Foundation rescues and rehabilitates abused primates such as those used in circuses and television advertising, as well as individuals previously kept as pets, like Suzie.

On Arrival at MONA, Suzie will be one of the oldest chimpanzees living there. The Foundation’s staff are looking forward to giving her a permanent home where she can live an enriched life with other chimpanzees and no longer be alone.

The Foundation is accredited by the European Alliance of Rescue centres and Sanctuaries (EARS) and provides individuals the opportunity to be rehabilitated both physically and mentally in a natural, enriched environment with other rescued chimpanzees.

Simon Marsh added, “Wild Welfare is all about ensuring the best care and welfare for all animals living in captive wildlife facilities and in the case of Suzie, we have no doubt that by assisting MONA, we have had a big impact on her future and helped ensure she can thrive during her later years.”

Wild Welfare’s digital education programme Wild About Welfare is available to the MONA Foundation team and the charity is keen to support their animal care staff with ongoing animal welfare training.