What does the future look like for animal welfare in zoos & aquariums? 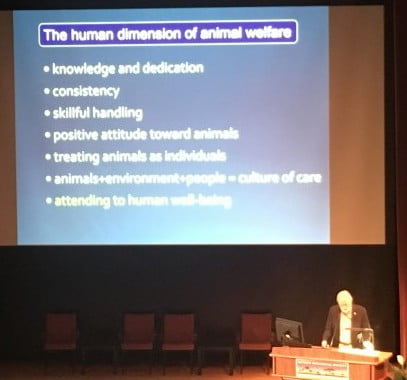 Wild Welfare recently attended the Center for Zoo Animal Welfare (CZAW) – World Association of Zoos and Aquariums (WAZA) joint animal welfare congress, which was kindly hosted by Detroit Zoo. It was an opportunity to listen to a variety of experts on ethics and animal welfare, including Marc Bekoff, Carl Safina, Ron Kagan, Temple Grandin, Jill Robinson, Jenny Gray and David Fraser with an opportunity for interactive sessions on various topics such as the ethical challenges of captivity and how we can actually assess animal welfare.

Bringing a global community of zoo directors, animal welfare experts and academics together on such a passionate subject is never going to be easy. Emotions run high and there are always going to be polarised views, particularly when it comes to the ethics of animals in captivity. Ethics and animal welfare are neatly entwined, convoluting the best of discussions. But the ethical debate of keeping animals in captivity is different to ensuring they have good welfare and we need to ensure we do not confuse the two. While the ethical debate on zoos and aquariums rages on – and should continually be challenged for a transparent and healthy approach to a mature zoo model in the 21st century – we also must not forget, that right here and now, thousands of animals are reliant on us to provide them with good care and welfare.

One of the main challenges is that there is no universal agreement on what animal welfare is. Differing definitions, varying cultural approaches and misunderstandings can lead to apathy or a depression in animal care and welfare. However, we must remember that despite these differing views, an animal’s own perception of its welfare remains the same.

The congress was an essential stepping stone in the zoo and aquarium community’s journey on animal care and welfare. Despite differences of opinion, without these opportunities to openly discuss animal welfare concepts and ethical challenges, it will be much harder to progress and unite on topics we all agree on. Namely, that all us are working in an industry where thousands of animals rely on us, day after day, to make their lives worth living. So good animal welfare is and must be a priority.

“A good zoo works for its animals, a bad zoo makes its animals work for it.”  Carl Safina

Some take home messages from the conference.

As a global community there will always be differences in approach. But we agree that animal welfare is a priority. We should champion the common goals and create solutions.

The common audience is the public. They want to hear what zoos and aquariums are doing, the good, the bad and the ugly. The captive animal community can pro-actively work with external NGO partners, media outlets and other stakeholders, to provide honest and up-to-date information.

The human dimension within animal welfare is essential for long-term change and success. Knowledge and skills, consistency, positive attitudes, respecting the individual animal, environmental and human well-being, all feed into the culture of care. Good animal welfare must be an institution’s cultural goal.

4) Responsibility outside our own zoos and aquariums

The captive animal community is global and recognises the responsibility for all wild animals held under human care. Leading zoos and aquariums can utilise their expertise and resources to support those facilities that require guidance in order to improve the welfare of their own animals.

From studying cognitive challenges to animals, to keeper-animal interactions, animal welfare science is evolving rapidly. As leaders in the zoo and aquarium welfare sector, there is an opportunity to carry out and share innovative research to further improve global animal welfare.

Zoos and aquariums have the opportunity to position themselves as leaders in wild animal welfare. Where empirical evidence demonstrates that specific welfare concerns cannot be adequately addressed in captivity, zoos and aquariums can collectively agree to take the step to reduce, refine or remove practices that cause poor welfare.