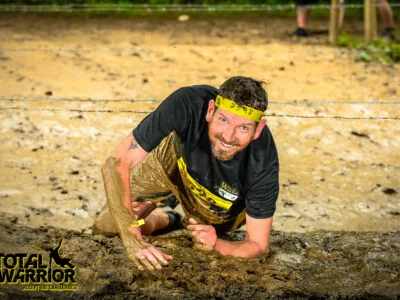 On Sunday 11th July, Simon donned his scruffiest sports clothes, with a view to getting very muddy in the Total Warrior event, taking place in Leeds in the north of England.

The Total Warrior challenge is a 12-kilometre event featuring 25 stamina-testing obstacles, including ‘The Human BBQ’, ‘The Plunge’, ‘The Shocker’ and ‘The Waterfall’. 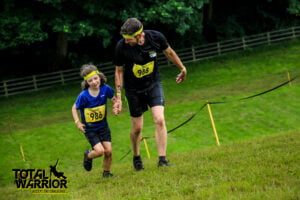 Simon tackled the muddy, gruelling course with a smile on his face and was still smiling at the end of the event as these great images show, and his son Edward also did fantastically well, taking part in and completing the Junior Warrior event of three kilometres.

“It was as much mud and sweat as I thought it would be be, but I was really pleased I could raise some money for our charity’s projects at the same time as having a fun day doing something active with my son,” said Simon.

Simon exceeded his fundraising target and his challenge, along with animal welfare field manager Sarah’s skydive, has seen more than £1,400 raised for the charity’s global animal welfare projects.

Later this month, there are still more fundraising plans, with the charity’s ambassador Hannah Russell, carrying out her Captain Tom Challenge, a 100-mile cycle in a day to raise funds for Siti, the lone macaque Wild Welfare are helping repatriate to a wildlife sanctuary in Indonesia.

Wild Welfare’s work is only possible thanks to the generosity of its donors, so it is always pleased to hear from those who would like to fundraise for their projects, simply visit the supporter pages HERE.