How Wild Welfare is supporting animal welfare improvements in zoos 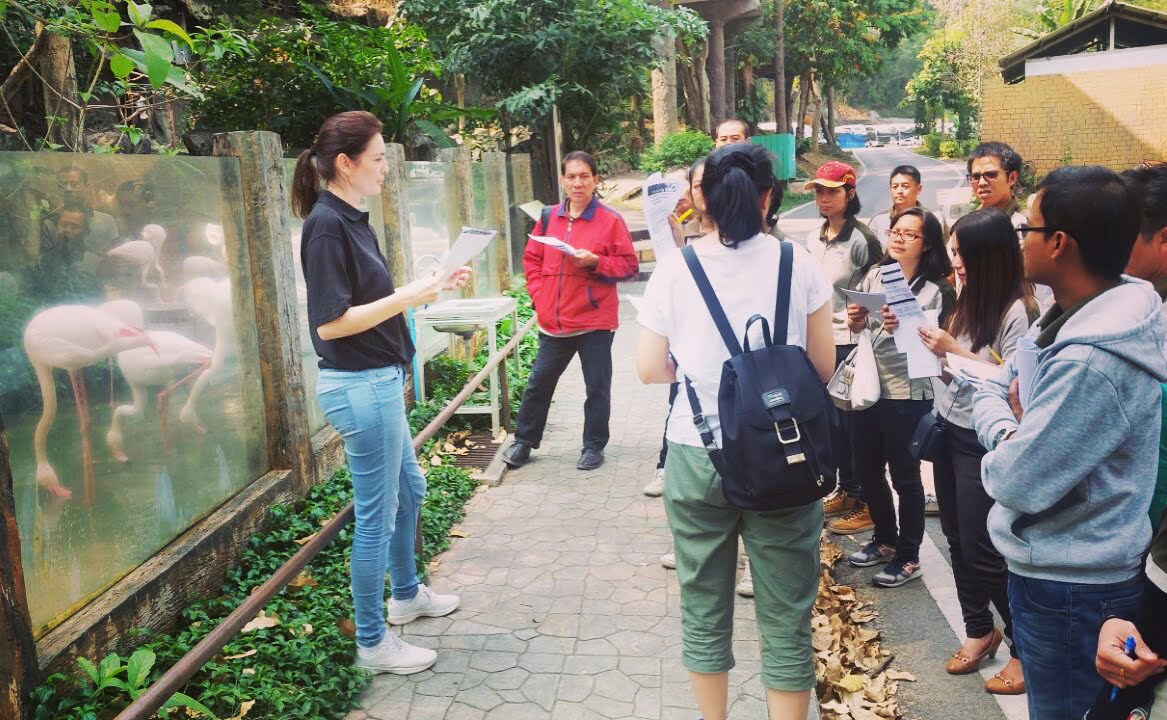 Did you know that the exact number of zoos and zoological type exhibits and collections around the world is actually unknown, but estimates have been made anywhere between 10,000 and 16,000 zoos worldwide?

Among the larger professional regional zoo and aquarium associations, such as the Association of Zoos and Aquariums (AZA) in the United States and the European Association of Zoos and Aquaria (EAZA), the care and custodianship of animals is one of the primary uniting factors of their accredited members, who are constantly striving to achieve higher standards of welfare. However, a significant number of captive wild animal facilities actually fall outside the ethical oversight of a zoo association, neither are they influenced by national or international legislation pertaining to high standards of animal welfare. Consequently, if follows that there are very likely hundreds, if not thousands of animals being kept under circumstances of poor welfare. Often the will is there is improve, but the lack of appropriate regulations, resources and knowledge acts as a barrier to improving animal welfare.

So, with such a potentially vast number of facilities lacking good animal welfare standards, how can we tackle this and start helping the animals, and communities that work with them?

Firstly, we need to agree on what animal welfare really means, but this in itself can be difficult, as actually there isn’t one truly agreed definition. Historically the focus on animal welfare was measuring physical health and an animal in good health was considered a happy animal. Although the term happy would never have been used as it would be considered anthropomorphising the situation! These days, scientists are more inclined to pondering emotions when it comes to understanding animal wellbeing, and it is generally considered that welfare involves affective (emotional) state and these are used as indicators of how an animal is coping with the conditions under which it lives. An affective state considers the psycho-physiological constructs of an animal, which in turn are affected by external environmental parameters. In 2012, the Cambridge Declaration stated that the human brain structures that generate emotions are the same in all mammalians, similar in avian and most likely, also seen in some decapods. There is agreement therefore, that many species can generate consciousness and thus are sentient.

Put simply, an animal is neurologically capable of experiencing emotion in a manner very similar to humans.

But measuring emotions and therefore understanding if an animal is thriving or not is not easy, even for resource-rich and experienced facilities. Even for humans it is hard, as a feeling is a subjective notion, but at least we can communicate our thoughts verbally – you can’t ask an animal to vocalise how they are feeling! However, we can assume that behaviours that are strongly motivated are rewarding and positive to that animal, and therefore we can consider how we provide for these behavioural motivations and measure how successfully we do so. We can also assume that where an animal lacks the ability to perform these behaviours, they may become frustrated or stressed and indicate this through abnormal or other negative behaviours. For example, a porcupine will be strongly motivated to dig and forage for food at night, as it is genetically pre-disposed to carry out this behaviour. Only feeding them during the day in bowls and providing a concrete-only enclosure will prevent these behaviours and cause frustration. Chimpanzees are hugely social and have evolved to use their large brains and stocky bodies to live in a complex and challenging environment. Holding them in inappropriate groups or in unstimulating environments, will lead to frustration and most likely stress too.

When zoos provide care that enables the expression of different behaviours that satisfying those strong behavioural motivations, an animal can thrive.

So, we need to be able to assess whether animals are able to consistently express these natural and normal behaviours. This allows us to understand whether we are meeting our moral obligations to care for animals under our care to a high standard. However, modern approaches to welfare measures that focus on assessing the affective state of the animals, are more often than not, inaccessible to the under-resourced and inexperienced facilities, usually those that fall outside of an association or legislative requirements So, despite significant recent advances in welfare comprehension, the potential for the proliferation of welfare concerns throughout the captive community still widely exists, creating a gap between a marginal group of leading zoos and aquariums and the rest of the zoo and aquarium community.

Wild Welfare works around the world to improve animal welfare in zoos and aquariums by partnering with facilities to identify short and long-term solutions and we summarise there are three main reasons for the continuation of a knowledge and application of practice welfare gap. Firstly, our experience suggests that some of the most common welfare concerns are ones that involve the provision of appropriate primary care. Unless guided, these care practices usually result from long-held beliefs and are often based on historical values or cultural perceptions. For example, a detrimental practice we often observe, involves the notion that cleanliness equates to a high standard of care. This can result in sterile and bland captive environments but still ticks the box for high standards of care under that particular facility’s operational duties.

Secondly, there is a lack of available literature on animal care and welfare for the facilities that need it. In many of the facilities, there is a lack of basic understanding of species biology, behaviour and what constitutes animal welfare, and an inability to research information. While there are a number of publicly available species-specific guidelines on animal welfare standards, for example, the AZA Care Manuals, these may be of limited use due to language barriers, access, or cultural implications of practice.

Thirdly, there are behavioural and learning barriers inhibiting changes that improve animal welfare. The proliferation of animal welfare science-led measures from the past decade remain inaccessible to many, and despite the welfare of animals under human care being a moral issue, it is governed by scientific values. This has the potential to reduce accessibility and limit engagement. An animal’s welfare is directly dependent upon the quality of life they experience, and that experience is solely dependent on the care we provide them. This “duty of care” requires that captive facilities take steps so that animal-management practices address specific animal needs and impact areas that promote positive experiences and avoid or minimise unnecessary negative experiences. This has to start with the implementation of basic primary care that supports more detailed welfare-directed management practices.

Wild Welfare provides training and support to develop primary care standards within zoos and aquariums. By detailing a range of operational duties, they can act as the criteria the facility can use to benchmark their welfare practices against. A standard is often considered a moral rule. For example, we hold ourselves accountable against a certain set of behavioural standards in society that are considered morally acceptable. The same moral obligations can be used when considering animal care practices and the standard Wild Welfare provides is based on more than 100 published articles and papers pertaining to the latest scientific literature for animal welfare and animal management.

The Wild Welfare standard has 11 different sections, ranging from record keeping and behavioural management to health and safety, and it includes measurable indices in the form of recommendations. Importantly we do not include numerical values within our standards and while any good standard must contain accessible and measurable indices, this should not mean simply focusing on a numerical measure such as enclosure size. It should focus on measuring what opportunities there are in the animal’s environment to express those strongly motivated behaviours. The problem with just using a numerical measure such as enclosure size, is there is no evidence-based and agreed regulation on what the size should be and we do not know if an animal’s welfare is good simply by knowing the size. Positive welfare is about the ability to express natural and normal behaviours and by simply measuring an enclosure size, you are not measuring what the animal is able to do in that enclosure. A large enclosure which is mis-managed can be more compromising than a small enclosure that provides more species-appropriate opportunities. Our standard includes recommendations for animal management practices that can impact an animal’s welfare, based around what an animal can do in the enclosure.

Wild Welfare also provides support in the development of assessment methodologies, to check whether a facility is meeting the identified criteria in that standard. Assessments are essentially checklists against your chosen standard and they support a consistent and professional approach to assessment. At the start of a good checklist, is a list of practices that are considered detrimental to an animal’s welfare and unacceptable. These are based upon up to date and evidence-based welfare research and can act as a baseline when considering whether something is of concern or not. If any of these practices are seen at the zoo it is considered a ’red flag’ and the zoo knows to immediately stop the action. These identified practices therefore support best practice as they are clearly identified as detrimental to animal welfare. Importantly we do not use a scoring system when marking our checklist. While there is certainly value in using scores, we find it is better to explore the topics in more depth with the facility, helping us overcome any sensitivity that could result from getting what was perceived as a poor score. By not having a scoring value, we remove any potential psychological barriers of welfare assessment and thus incorporating a subjective, but controlled parameter to the approach which we hope encourages further engagement and learnings in even more diverse and reflective approaches to animal welfare.

By using a standard and a checklist, a zoo can develop its own literature that incorporates necessary cultural or legislative differences, while conforming to recognised standards of animal care. By reviewing the application of human care within a whole collection, we also do not discriminate against any particular species. While assessing zoos, we are often asked to prioritise their time assessing well-known fauna such as primates or big cats, and the zoo staff are surprised to find they must give appropriate consideration towards the welfare of animals used for prey and live feeding. This creates opportunities for dialogue on what animal welfare really means, how all animals have the capacity to suffer and what practices can be taken to mitigate suffering. This whole collection approach can also address general management practices that can have an impact on a large number of individual animals.

The simplicity of our approach means it can be adapted and used for both self-assessment and external evaluation by third parties. Utilising the standard in conjunction with the assessment checklist, staff can use the framework, with or without supervision, dependent on their level of species care knowledge. Even with only a basic knowledge, the checklist is designed to lead the assessor through a series of questions that enables outmoded management practices that impact animal welfare negatively to be challenged and for a more complete approach to animal welfare management to be encouraged.

There is no one way of assessing and improving animal welfare in captivity, and novel new approaches are regularly being researched. However, while there is still a persistent gap in animal welfare standards globally, we believe a simple approach that encourages engagement, knowledge and confidence in welfare is important. We can help bridge this gap through a supportive approach that helps define how standards and governance in zoos can be dictated. This is essential for supporting long-term improvements in animal welfare practice and understanding, making those necessary changes that help the right people, help the animals in need.

This blog is also published on ZooSpensefull