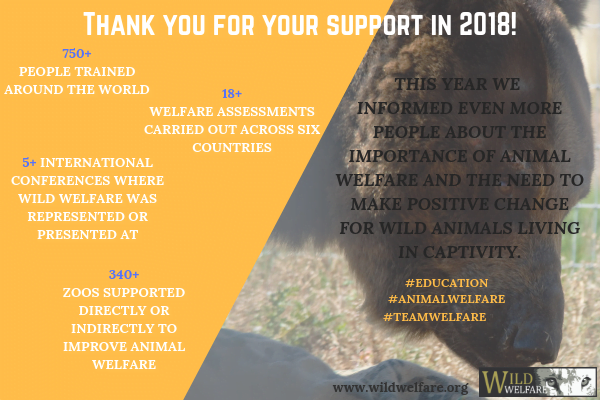 Thank you for your support during 2018! For all those of you that have worked alongside us on the ground in our field projects, to those we have turned to for expert advice and support, and to all those of you who have been kind enough to give your generous financial backing to fund our vital work, we are so grateful to you all for helping us over the last year.

This year Wild Welfare’s work has helped wild animals living in captivity across more than a dozen different countries, with active projects taking place in six of these.

We rely on strong partnerships with the zoo and animal welfare communities and are lucky enough to consider many of the people we work with not just good colleagues but also friends, thanks to the strong collaborative efforts we make to help address poor animal welfare.

2018 has been the year we have seen welfare put top of the agenda in Southeast Asian zoos, with changes taking place that are set to benefit thousands of captive animals living in zoos and aquariums across a range of countries, including Thailand and the Philippines, Indonesia and Malaysia.

We were able to put Wild Welfare on the map this year, with our charity’s work featuring in the international media and the issues facing wild animal welfare brought top of the news agenda.

Our biggest project to date and something that had never been attempted before – moving a group of captive brown bears from Japan to a new home in the UK – was a big success, and has cemented partnerships and networks in Japan that will prove essential for our continued work addressing wild animal welfare concerns throughout the country’s zoos and aquariums.

We have formed new partnerships this year, welcomed new trustees, new staff members and most important of all, new supporters and partners. Injecting fresh expertise, a fresh outlook and increased experience and enthusiasm into our team has been invaluable and has meant our capacity and scope of work has been able to grow phenomenally.

Talking to new supporters and partners has given us both the chance to receive critical funding for our projects, but also the chance to inform more people about the importance of animal welfare and the need to make positive change.

There are thought to be more than 10,000 facilities worldwide that house wild animals and open their doors to the public. Possibly less than one thousand of these follow professional guidelines and standards that protect animal welfare, leaving potentially thousands of wild animals in facilities and those that look after them, in need of support, advice and help.

There is so much to do, with a growing need for Wild Welfare next year and beyond. We want to say a big thank you for helping us this year and we look forward to you joining us as we take on 2019.